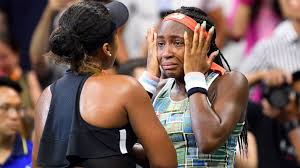 15-year-old Cocu Gauff has defeated defending champion Naomi Osaka, 22, at the Australian Open, and it took her only sixty-seven (67) minutes to claim one of the biggest wins of her young career.

The young American sensation stunned the world No.3  by defeating her 6-3 6-4 in straights sets at The Rod Laver Arena on Friday to book her place in the fourth round in Melbourne.

After the game, an excited Cocu Gauff said: “Two years ago, I lost in the first round at juniors and now I’m here!”

The win comes four days after she defeated tennis legend, Venus Williams, in the first round of the Australian Open.

‘What is my life? Oh my gosh, Two years ago I lost first round in juniors, and now I’m here. This is crazy,’ said Gauff, who is still doing schoolwork online.

‘I was just telling myself one point at a time and keep fighting because you never know what happens on this court. I’m on Rod Laver Arena, I can’t believe this.’

Cocu will now face either American Sofia Kenin or Shuai Zhang of China in the next round.