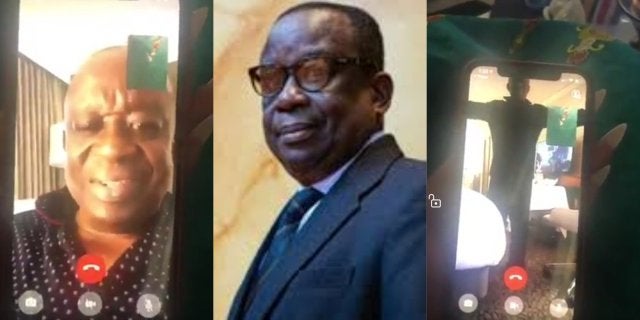 In the three minutes video clip, the minister, who was still in his pyjamas, could be seen obeying the request of the sweet-voiced lady at the other end of the video call.

The face of the lady wasn’t shown, only her fingers and her voice could be seen and heard.

The love-struck musician turned politician, kept ‘obeying’ the lady’s orders without any objection as if she cast a spell on him.

“…I want to see your pajamas. I want to see the front, the back, like the way you did it yesterday… Turn around and let me see it, is it trousers or shorts… raise your leg…”, the lady said whiles the minster could be seen following her order.

During the call, Kan Dapaah also revealed how the lady’s hug made him sleep immediately and his desire to have a bath with the chic.

The conversation ended with the minister indicating that he had to go and shower so he could attend a meeting.

It appears the chartered accountant was on a trip outside the country at the time the video was recorded.

“I’m going to the bath now to have a bath with you; we’re going to bath together,” he said in the conversation.

The lady then called him “babes” while he responded saying, “I love you”.

The video has caused a stir on social media as Ghanaians are calling for the resignation of the minister while others have lashed out at Mr. Kan-Dapaah over his failure to manage his own personal security.