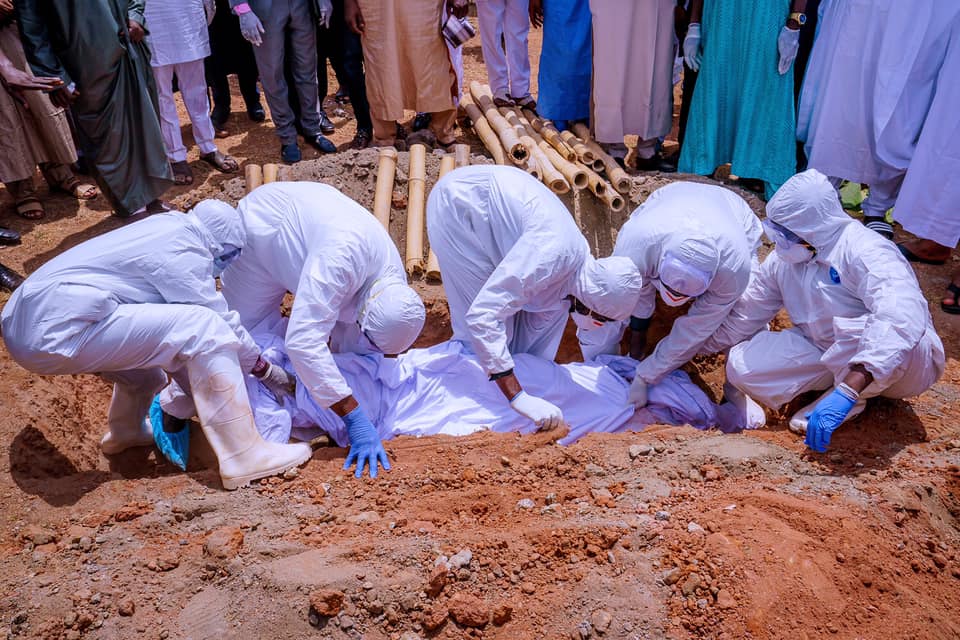 Members of the Federal Capital Territory Enforcement Team on COVID-19 were not aware of the burial of the president’s late Chief of Staff, Abba Kyari, an official said.

Attah Ikharo, the head of the team disclosed this to PREMIUM TIMES on Monday.

This is in reaction to outrage over the disregard for social distancing and other health advisories at Mr Kyari’s funeral.

Many Nigerians have asked the Task Force to arrest and prosecute those who violated the protocols and guidelines of the NCDC at the funeral. Some Nigerians have also faulted the team’s method of prosecuting defaulters of the lockdown order, accusing it of targeting the vulnerable.

Already, the presidency has barred some presidential aides who attended the funeral from the Villa and has ordered that they be self-isolated.

Moreso, other attendees who participated in the burial have been identified. They will be isolated and tested as well, an official told PREMIUM TIMES.

However, reacting to the controversy, Mr Ikharo said members of the team were spread out across the Federal Capital Territory and were not aware of the burial.

“For us in the enforcement, we (were)around Airport Road during the burial, Kubwa road, Nyanya, Dutse Alhaji and Mpape. We were not aware when the burial took place.

“But what I think should be more consolatory and more rewarding is the fact that the presidency has come up to say all those who attended that burial should go on self-isolation. And the journalists who were there, the state house media unit has also come out clearly asking them to go on self-isolation.

“I think that has sent a very strong message coming from the highest organ of government in the land. For me, as an enforcer, I commend the president for that and I think that message is enough to tell people the government’s stand on this,” he said.

He also added that over 150 persons have been prosecuted and more prosecutions are ongoing as the team is yet to collate the total number for the day.

He also said some of those convicted are asked to do community services and others are fined between 3000 to 5000, “depending on the gravity of the crime.”

“But most of them were asked to leave their vehicles until (after) the COVID-19 period which we don’t know how long it will last,” he added.

He further appealed to residents to comply with the lockdown order to avoid arrest and prosecution.