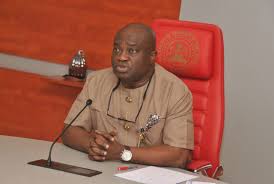 The Transition Committee Chairman of Arochukwu Local Government Area of Abia, Onyekachi Okoro, is dead, a chieftain of the Peoples Democratic Party (PDP) in the area has confirmed.

Mr. Okoro was said to have slumped at a private residence in Umuahia around 1 pm on Thursday and died before he could get medical help.

The PDP Chairman, Anthony Nwankwo, confirmed the incident to journalists at the Federal Medical Centre, Umuahia, where the deceased was taken to for medical attention.

Mr. Nwankwo, who was a close political ally of the deceased, said he slumped after holding a meeting with some officials of the council in Umuahia.

He said: “The man had a meeting with the council’s Head of Service and Treasurer in Umuahia.

“Thereafter, he visited the house of our leader (name withheld). At the place, he went into the restroom.

“When he came out of the restroom, he started feeling somehow and eventually slumped,” adding that he was quickly rushed to the hospital.

He further said the Medical Director of the hospital, Azubuike Onyebuchi, was immediately contacted and that he joined a medical team to carry out palpitation on him “to see if he could be resuscitated.”

He refuted the report on some social media platforms that the deceased slumped and died in his house in Arochukwu after holding a meeting in his office with some council officials.

A medical doctor at the Accident and Emergency (A and E) Unit of the hospital said Mr. Okoro “was brought here dead.”

The doctor, who spoke on the condition of anonymity, said efforts made to resuscitate him by a team of medical doctors were unsuccessful.

News Agency of Nigeria (NAN) reports that his remains were still lying within the precincts of the A and E unit at the time of filing the report.

Okoro was appointed the Chairman of the local government in December.