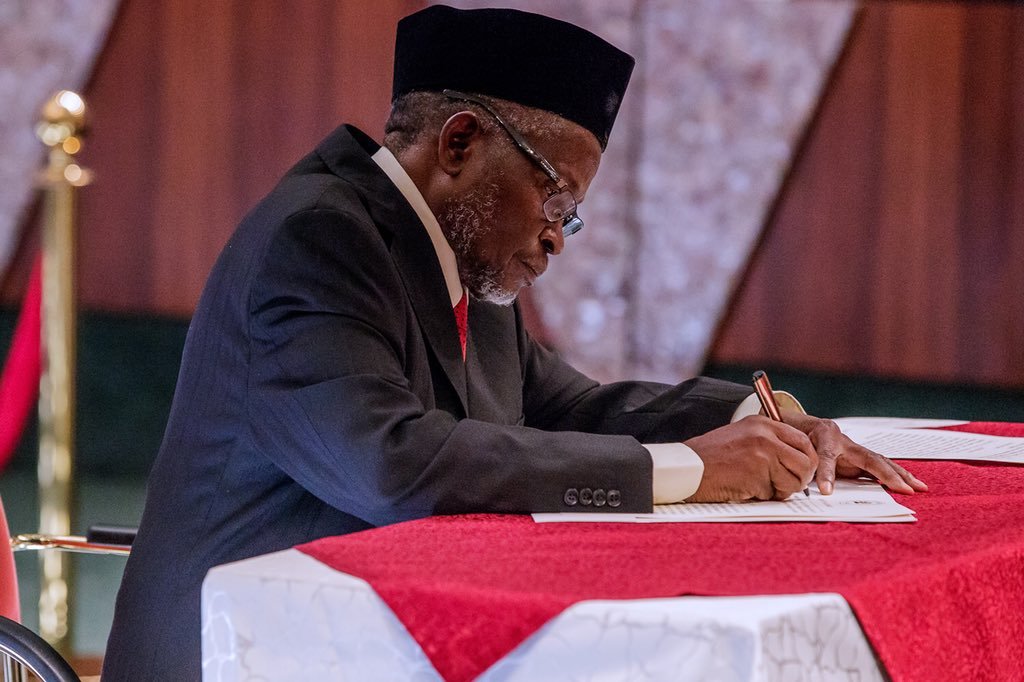 The acting Chief Justice of Nigeria, Ibrahim Mohammad, appointed in controversial circumstances by President Muhammadu Buhari on Friday, has inaugurated 250 members of the presidential and National Assembly elections.

The elections will hold February 16.

Mr Mohammed was appointed by Mr Buhari as replacement for Justice Walter Onnoghen, who is accused of false asset declaration.

Mr Onnoghen’s removal has sparked widespread condemnation as it is deemed unconstitutional.

Under the 1999 constitution, the chief justice can only be removed with the approval of the National Judicial Council and the Senate.

Mr Onnoghen was removed as he prepared to inaugurate members of the election tribunal.

Justice Mohammad chaired the inauguration of the tribunal members at the ceremonial complex of Nigeria’s Supreme Court on Saturday.

He urged the 250 appointed chairpersons and members of the Election Petition Tribunals to be guided by the fear of God in the performance of their duties.

“I am delighted to address you all on this occasion of the swearing-in ceremony for the newly appointed Chairmen and members of Election Petition Tribunals for the 2019 General Elections that is around the corner.

“As you lordships take the oath of office as chairmen and members of the Election Petition Tribunals, let me remind you that this oath is a solemn appeal to Almighty God.

“Therefore, it is God Almighty that you will be ultimately responsible to.

“Therefore, it is from this oath that your duties and responsibilities as chairmen and members of the Election Petition Tribunals in your various places of assignment spring forth and has a binding effect.

“This is an ethical undertaking to justice as well as upholding the rule of law in our courts.

“As such, I implore you to discharge your onerous duty diligently and with the fear of God Almighty,’’ he said.

Mr Muhammad also said: “The judiciary is in trying times; you must stand to protect and uphold the integrity of this arm of government’’.

“I therefore congratulate you on this appointment and I urge you to see this assignment as a call to greater service to your nation.

“I encourage you to uphold and enhance the honour and standing of the judiciary and I pray that the Almighty God will bestow upon you strength, good health and wisdom in the performance of your duties,’’ Mr Muhammad said.

The News Agency of Nigeria (NAN) reports that Justice Sidi Bage was one out of the remaining 15 justices of the Supreme Court that attended the ceremony along with the acting CJN.