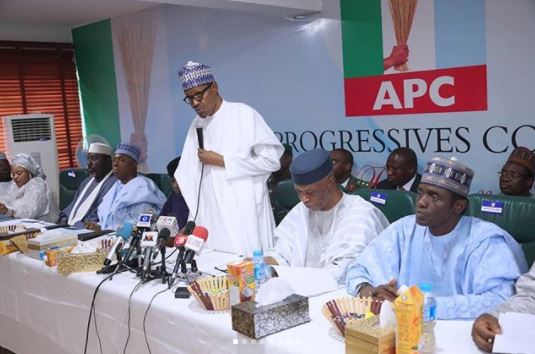 President Muhammadu Buhari has asked the All Progressives Congress (APC) leadership to consider granting waivers to party executives at all levels that may want to contest in its planned elective convention.

The president while speaking at the party´s National Executive Committee (NEC) meeting on Monday in Abuja, said this was necessary to forestall disenfranchising some executives.

Buhari had at another NEC meeting on March 27, opposed the one-year tenure extension decision, beginning from June, saying it was illegal and unconstitutional.

APC NEC at its meeting of February 27, approved the extension of the tenure of the Chief John Odigie-Oyegun-led National Working Committee and the party´s other executives by one year, starting from June.

Buhari had at another NEC meeting on March 27, opposed the one-year tenure extension decision, beginning from June, saying it was illegal and unconstitutional.

He had explained that the decision was causing acrimony within the party, with some members not comfortable with the matter, dragging the party to court.

This consequently led the party´s NWC to constitute a 10-member technical committee to advise its leadership on the issue and the way forward.

´´I also believe that the current executives should be free to run for elective position in the party if they so wish as permitted by our party constitution.

´´However, considering the provision of Article 30 Section 1 and Subsection 3 of our party constitution which requires any serving officer desirous seeking re-election to resign from office 30 days before the election

´´I’m not sure of the practicality of the present serving officers ability to meet this condition.

Accordingly, the party may consider granting waivers to party executives at all levels so that they are not disenfranchised in participating in the elections provided this does not violate our rights or our rules,´´ he said.

He added that necessary waivers should also be extended to executives at the ward level whose tenures may have elapsed and to any other members wishing to contest.

This, the president said would give credence to the right to freedom of association guaranteed by the amended 1999 constitution.

He, therefore, directed the party´s leadership to issue a statement on the suggested waivers to make room for more participation, saying that the must not be ignorant of the task ahead of it.

He thanked members of the technical committee for a job well done within a limited time frame.

´´It shows the essence of commitment and the ideals of our party with a view to consolidating the party to continue to provide good governance in the overall interest of Nigerians,´´ Buhari said.

He added that in the general interest of the party and based on the technical committee report, it is important to focus on how to move the party forward by avoiding actions that were detrimental to its interest.

He said that considering that politics was a game of numbers, the party must not be a house divided against itself and must try to appreciate and accommodate differences as far as the law permits.

He maintained that having seen the committee´s report, his position was to ensure that the party towed the part of unity, legality, cohesion and not that of division.

He stressed that the party must strengthen its internal democracy by organising congresses and convention where election of national executive committee members would be held.

This, the president said, would automatically end the cases filed by members seeking orders of court compiling the party to hold congresses.

´´Just like our party symbols the broom, we stand by strength in unity. Let us try to be united in party, victory is sure by the grace of God.

He added that the party´s members must continue to sanitise Nigeria’s political environment.

He expressed optimism members would conduct themselves without rancor, and promote the highest interest of the party and the nation.