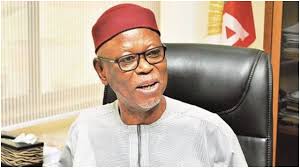 The Governors are Abdulaziz Yari of Zamfara, Simon Lalong of Plateau, Rochas Okorocha of Imo, Abdullahi Ganduje of Kano and Ibikunle Amosun of Ogun.

The governors were earlier with President Muhammadu Buhari, where they made known their decision of supporting the president against the extension of Oyegun’s tenure .

“Today the governors, NWC decided to sit and look at the issues seemingly dividing us. All the issues you have been completely and totally resolved. We are back in business as one united and happy family.

“I want to say that NEC setup a technical committee. From the minute we called them into session they have worked non-stop with virtually no sleep,” Oyegun said.

Oyegun also confirmed the national executive committee (NEC) meeting of the party will hold on Monday.

“NEC will hold on Monday. The chairman of the committee said his report will be ready by evening it will be placed at NEC for appropriate actions.

“The APC leadership is back as one united and focused party. Strongly behind the president and executives in the states,” he added.