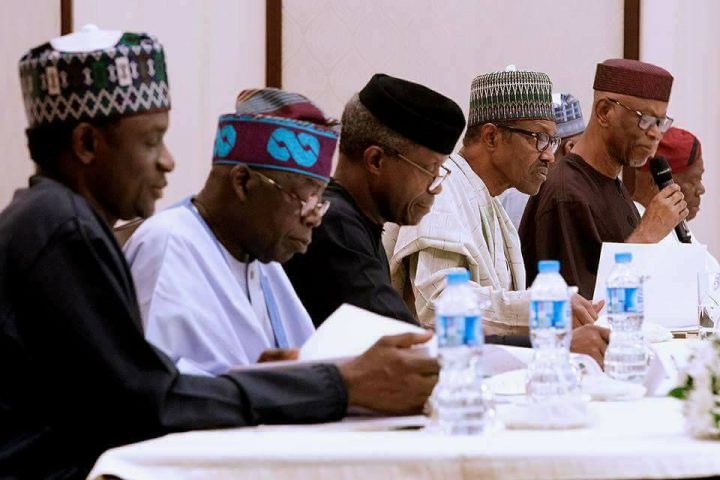 The All Progressives Congress (APC)  confirmed that it would hold its National Executive Committee meeting today to resolve its lingering leadership succession crisis.

The party’s National Publicity Secretary, Malam Bolaji Abdullahi, said in spite of the constitutional issues around the meeting’s notice, it would go on as scheduled, clarifying that it is a continuation of the penultimate week’s meeting of the NEC.

“I don’t think there is any issue about the meeting’s notice because the Monday’s NEC is seen as a continuation of the last one held last week,” he said, adding: “The notice for the meeting has been given since that time because we didn’t finish the issue of constitutional amendment, the report of the committee on true federalism and all that. So the question of the constitutionality of the meeting does not even arise.”

Abdullahi’s confirmation headlines the storm expected at the meeting as members are expected to deliberate on President Muhammadu Buhari’s constitutional points of objection to the February 27, 2018 NEC’s decision to extend the tenure of the John Odigie Oyegun-led National Working Committee (NWC) as well states and local government executive committees.

The extension had elicited strong objection very senior chieftains of the party, including its National Leader, Senator Bola Tinubu, and Governor of Zamfara State, Alhaji Abdulaziz Yari, who argued that it was in violation of the party’s and the 1999 Constitution as altered, which provide for period election for executives of political parties.

As opposition to the extension of the executive tenure which ought to end on June 13, 2018 rose, with the Lagos State chapter and three other members filling suits against it in court, the president in a surprise move backed the opposition gang, advising the party leadership to reverse itself.

Dazed by Buhari’s masterstroke, the proponents of tenure elongation, prominent among who were governors of the party, particularly, Ondo State Governor Rotimi Akeredolu (SAN) and the National Legal Adviser, Mr. Muiz Banire (SAN), initially resisted, extracting a technical committee from the NEC to review the president’s advice.

As the technical committee populated largely by proponents of tenure elongation, including Plateau State Governor Simon Lalong set about its work, governors of the party, perhaps aware of the implication of confronting the president went into several meetings to break the emerging logjam.

After last Monday’s meeting of the party’s governors with the president, it became obvious that the tenure elongation was losing steam and would sustain its resistance to Buhari’s advice for long.

The resistance broke down irretrievably on Tuesday after another meeting of five of the governors and the president at the Presidential Villa, Abuj It was gathered authoritatively that at the meeting attended by the APC Governors’ Forum Chairman, Imo State Governor Rochas Okorocha; Senator Ibikunle Amosun (Ogun State); Yari (Zamfara); Abdullahi Ganduje (Kano State); and Lalong (Plateau), Okorocha assured Buhari that all the governors, except four, were for his advice.

Pointing at Lalong, Okorocha was said to have told Buhari that the Plateau State governor along with Malam Nasir el-Rufai (Kaduna), Akeredolu (Ondo) and Yahaya Bello (Kogi) were the only odd men amongst them.

Lalong was said to have gone into a rage, denying his support for tenure elongation and promising to be on Buhari’s side of the divide.

The report of the technical committee submitted to Oyegun on Friday, widely reported to have recommended the reversal of the February 27, 2018 NEC decision to extend the party’s executives tenure by one year from June 13, 2018 must be Lalong’s clearest indication that he had switched camp.

With the collapse of the elongation support, the governors, had refocused their attention on the control of the convention planning committee, routing for Governor Badaru Abubakar of Jigawa State.

This, however, might again pitch the governors against the president, who is said to prefer the former interim National Chairman of the party, Chief Bisi Akande.

As a lot of fireworks are expected at the Monday meeting, with the remnants of advocates of the tenure elongation still hoping to use the Forum of State Chairmen to upset the apple cart, names of likely contestants for the party’s national chairman have begun to emerge.

Top on the list is Oyegun, who is said to have behind him some of the governors that backed his tenure extension. Others are former governors, Mr. Adams Oshiomhole (Edo State), Timipre Sylva (Bayelsa) and Clement Ebri (Cross River State).