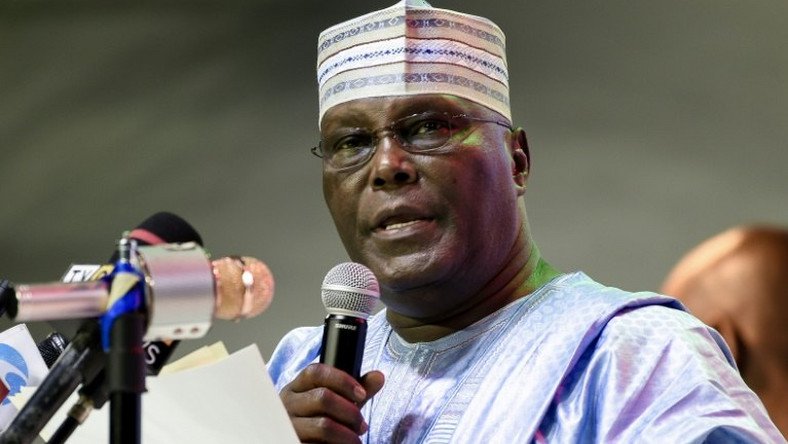 Atiku made this known in a statement a few hours after President Muhammadu Buhari of the All Progressives Congress (APC) was declared winner of the election.

I have never seen our democracy so debased as it was on Saturday, February 23, 2019…. In 2019, it is sad to see those who trampled on democracy thumping their noses down on the Nigerian people. Consequently, I hereby reject the result of the February 23, 2019 sham election and will be challenging it in court,” he wrote on Facebook.

See the full statement below:

Democracy Will Not Be Emasculated in Nigeria

I thank the Nigerian people who trooped out in their millions to perform their civic duty this past Saturday. The patriotism of Nigerians is heartwarming and affirms my oft-repeated statement that we are brothers and sisters born from the womb of one mother Nigeria.

With regards to the Presidential elections that took place on February 23, 2019, it is clear that there were manifest and premeditated malpractices in many states which negate the results announced.

One obvious red flag is the statistical impossibility of states ravaged by the war on terror generating much higher voter turnouts than peaceful states. The suppressed votes in my strongholds are so apparent and amateurish, that I am ashamed as a Nigerian that such could be allowed to happen. How can total votes in Akwa-Ibom, for instance, be 50% less than what they were in 2015?

Another glaring anomaly is the disruption of voting in strongholds of the Peoples Democratic Party in Lagos, Akwa-Ibom, Rivers and diverse other states, with the authorities doing little or nothing and in some cases facilitating these unfortunate situations.

The militarization of the electoral process is a disservice to our democracy and a throwback to the jackboot era of military dictatorship. In some areas of the country, such as, Rivers, Akwa Ibom and Imo states, troops deployed for the elections turned their guns on the very citizens they were meant to protect. This is condemnable and should not be associated with our electoral process in the future.

I am a democrat and there are democratic avenues available to present the truth to the nation and the watching world. Already, many international observers have given their verdicts, which corroborate our observations. I am sure more will come in the coming hours and days.

If I had lost in a free and fair election, I would have called the victor within seconds of my being aware of his victory to offer not just my congratulations, but my services to help unite Nigeria by being a bridge between the North and the South.

However, in my democratic struggles for the past three decades, I have never seen our democracy so debased as it was on Saturday, February 23, 2019. 2007 was a challenge, but President Yar’Adua was remorseful. In 2019, it is sad to see those who trampled on democracy thumping their noses down on the Nigerian people.

Consequently, I hereby reject the result of the February 23, 2019 sham election and will be challenging it in court.

I want to assure my supporters and the entire Nigerian people that together, we will not allow democracy to be emasculated.

I hope and pray Nigerians will someday summon the courage to defend democracy. That is the only way we can move away from being the world headquarters for extreme poverty.