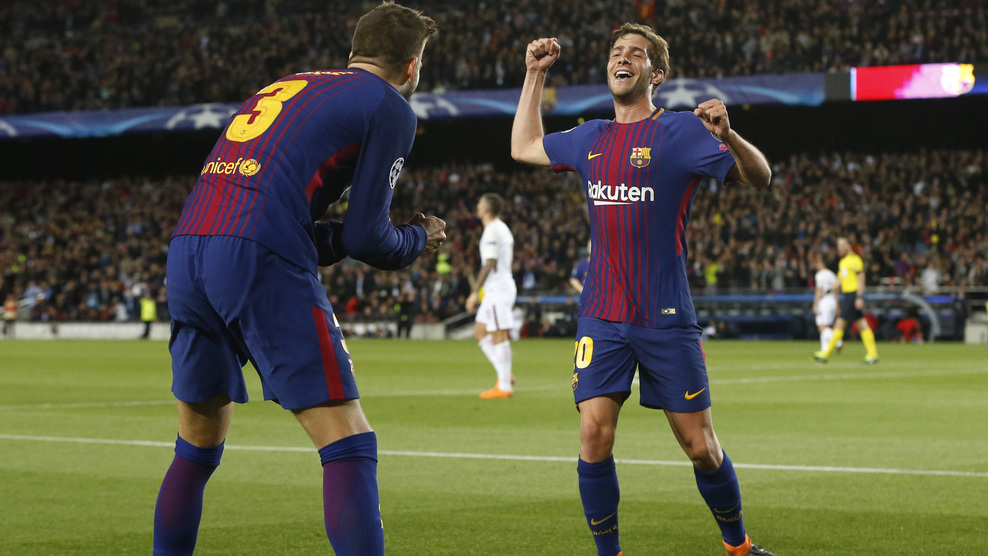 Cancel
Barcelona will take a commanding lead to Italy for their quarter-final return after two own goals and strikes from Gerard Piqué and Luis Suárez left Roma with it all to do. The visitors more than matched Ernesto Valverde’s men in the first half but fell behind when Daniele De Rossi diverted Andrés Iniesta’s pass into his own net. Roma’s fortunes did not change after the interval either, as Kostas Manolas nudged Ivan Rakitić’s cross onto the post and the ball rebounded back off him into the net.

Barcelona celebrate one of the two own goals©AFP/Getty Images

Piqué tapped in a third shortly after but Edin Džeko swept in an away goal to give the Giallorossi hope with ten minutes remaining. However, there was still time for Suárez to drive in a fourth for the home side and leave Eusebio Di Francesco’s charges with an uphill task next Tuesday.

Ivan Rakitić seems to give Barça an unfair edge over other teams. That the Blaugrana already have a computer on legs in the middle of midfield, in Sergio Busquets, is crucial. That he is now partnered by the Croatian is a huge strength for Valverde’s side. More and more, including tonight, Rakitić makes decisions which shine with calm intelligence. His was the shot off the post in the first half, his was the mini-sprint for the line to create the second goal. Special technique, first-class brain, Busquets clone. What’s not to like and appreciate?

Graham Hunter, Barcelona: Winners need to get the breaks now and again. Often in the recent past this Barça group have made their own luck with incessant, insistent, intense play. This wasn’t one of those nights. This time they really did have some good fortune. Two own goals in their favour, a millimetre-tight decision when a free-kick was correctly awarded against them instead of a penalty, and a Roma side not quite able to turn their vivacity and energy into the away goals they merited. Nobody in Blaugrana will be complaining but they won’t want to play like this very often.Ben Gladwell, Roma: A look at the naked result certainly does not tell the story of Roma’s performance tonight – it deserves to be dressed up a little. Džeko’s goal gave them a glimmer of hope for the second leg but overturning a three-goal deficit, even with an away goal, is a tall order. Nevertheless, if they can perform the way they did here – with the same determination and energy – the return at the Stadio Olimpico is not a foregone conclusion. One thing will have to change there, though: they will need to be more incisive, and not do Barcelona any favours.