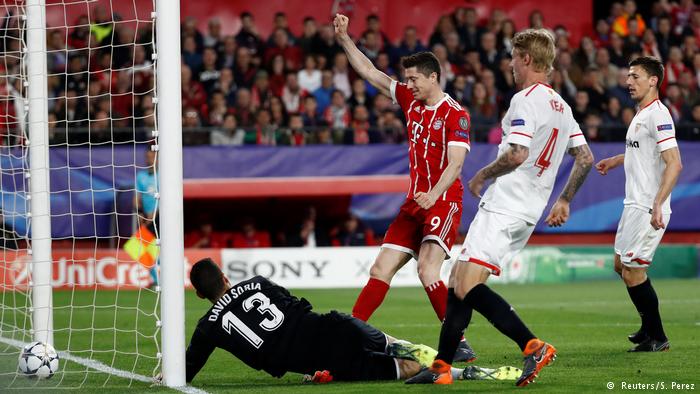 Bayern München took a significant stride towards the UEFA Champions League semi-finals as they came from behind to become the first German club to win at Sevilla.
In the European Cup quarter-finals for the first time since 1958, Sevilla passed up a golden chance to break the deadlock in the 20th minute as Sergio Escudero’s blocked cross fell for the unmarked Pablo Sarabia, who curled wide. The Sevilla midfielder made amends just past the half-hour, beating Juan Bernat to another Escudero centre; this time the finish was unerring.

Home joy proved short-lived as Frank Ribéry’s cross was turned into his own net by a sliding Jesús Navas to restore parity, and Bayern slowly took control of the tie.

It took them until the middle of the second period to make it count, Ribéry’s deep left-wing centre headed in by Thiago Alcántara with the help of a deflection – enough to give Bayern a slender but significant advantage for next week’s return in Munich.

Key player: Franck Ribéry (Bayern)
Out of contract at the end of the season, the Frenchman has been in fantastic form of late and once again showed that he still has a lot to offer on the big stage. He looked lively from the start down the left and played a crucial role in both goals, his low ball in turned into his own net by Navas before a perfectly-flighted cross was headed in by Thiago for the winner.

Graham Hunter, Sevilla: As impressive as Bayern were in the second half, Sevilla will be thinking they dropped their level, that the tiredness from Saturday’s epic against Barcelona cost them more than anticipated. Might it all have been different if Sarabia had scored his earlier chance or if Vincenzo Montella had used his substitutes sooner? Yes to both, but this is the old story; experience counts heavily, and you miss chances at your peril.

Jordan Maciel, Bayern: Sevilla deservedly took the lead and were the better team in the first half, but Bayern did enough to get an away goal during a difficult phase – a characteristic of champions. In the second half, the visitors took control and slowly wore Sevilla down. For the first time in six trips Bayern leave Spain as winners, and you’d expect them to qualify for the semis now.

Key stats
Bayern have now won seven #UCL matches in a row
Sevilla’s first defeat at home to German visitors, in their 12th match (W7 D4)
Bayern had lost five in a row in Spain before tonight
Jupp Heynckes extended his record run of #UCL wins to 12
The Munich club have scored 20 goals in their last seven #UCL fixtures
Sevilla have won five of their nine away games against Bundesliga clubs