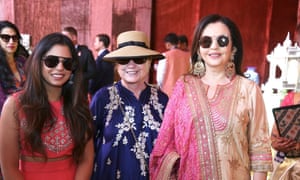 Isha Ambani, whose father is a tycoon, was set to wed Anand Piramal, son of Indian billionaire industrialist Ajay Piramal, in the Ambanis’ 27-storey home in Mumbai

Joining them was a who’s-who of India’s super-rich elite, arriving on dozens of specially chartered flights into Udaipur’s normally sleepy airport and whisked away in expensive cars.

Actress Priyanka Chopra and American singer Nick Jonas, who themselves became husband and wife earlier this month, were also guests at Udaipur’s City Palace on the banks of Lake Pichola.