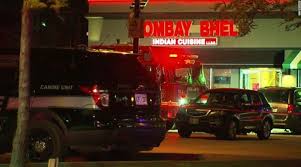 An explosion was reported at an Indian restaurant in Canada’s Ontario on Friday. According to initial reports, two bombers were behind the blast which injured 15 people, three of them are critical.

Reports further added that emergency crew responded to calls in Mississauga at around 10.32 pm local time. The area where the blast occurred is between the Hurontario Street and Eglinton Avenue of Ontario. The restaurant, called Bombay Bhel, is in Mississauga, Ontario, a city just south of Toronto. Mississauga has a large immigration population and is especially popular destination for Indian immigrants.

The blast comes months after the driver of a van plowed into pedestrians and killed 10 people in Toronto and injured 14 more. The suspect in that attack, Alek Minassian, intentionally struck the victims in what was likely to count as Canada’s deadliest vehicular assault, the police said.