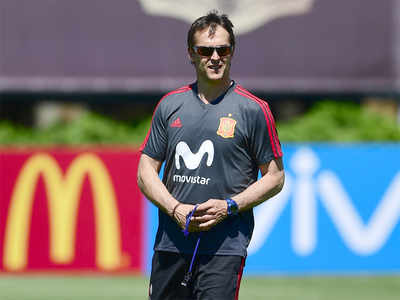 The Spanish Football Association have sacked managed Julen Lopetegui one day before the start of the World Cup in Russia after he withheld the news that he was replacing Zinedine Zidane at Real Madrid following the tournament.

Appearing at a press conference in Moscow on Wednesday, new Spanish FA (RFEF) president Luis Rubiales announced that Lopetegui’s behaviour in the build-up to Russia 2018 has been “unacceptable”, having agreed to take over at Madrid upon the conclusion of Spain’s World Cup campaign.

“We have decided to fire the national coach [Lopetegui],” Rubiales said at a press conference in Moscow on Wednesday. “What we have achieved in getting here is due in great part to him, and we must thank him and wish him luck.

“The Spanish national team is the team of all the Spaniards. We only found out just five minutes before [it was announced] that he was leaving for Madrid. “There is a way that you must act, Julen has worked in a great way with the team, but we cannot accept how he has acted in this case.”

Former Spain skipper Fernando Hierro has been asked to take charge of the team for the world cup campaign.