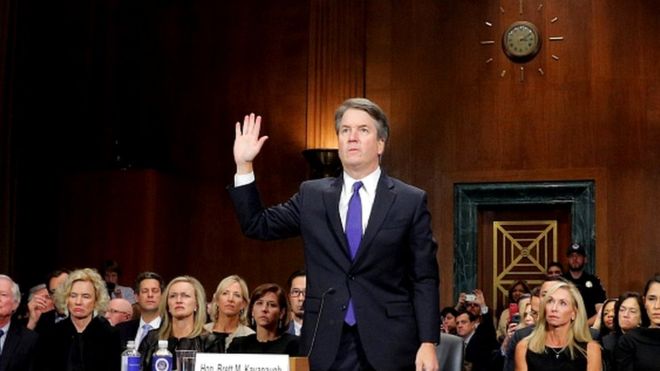 After weeks of political wrangling, the US Senate is set for a final vote on the confirmation of President Donald Trump’s nominee to the Supreme Court, Brett Kavanaugh. If senators do not change their voting intentions, Judge Kavanaugh will be appointed to the top US court.

Mr Kavanaugh has been embroiled in a bitter battle to stave off sexual assault allegations.

It’s actually been in session throughout the night covering the issue, although the debate has taken place in a largely empty chamber. Senators are expected to be there in force from 15:30 in the lead-up to the vote.

The Senate is split 51-49 in favour of the Republicans and the vote will be largely along party lines. Mr Kavanaugh would actually only need a 50-50 vote, as that would force a tie-breaker in his favour from Vice-President Mike Pence. It’s looking like a 51-49 vote in the judge’s favour at the moment, barring last-minute changes of mind. This was the tally in a procedural vote on Friday.

That’s because Republican senators who had been wavering on the issue have come down, with one exception, on Mr Kavanaugh’s side.

The one exception is Alaska Senator Lisa Murkowski. Although she said Mr Kavanaugh was a “good man”, she said he was “not the right person for the court at this time” and his “appearance of impropriety has become unavoidable”.

But her “no” vote will be balanced by a “yes” from the only Democrat set to back the nomination.

Senator Joe Manchin is facing a difficult re-election campaign in West Virginia, a traditionally Republican state that Mr Trump won by a landslide.

He told the Senate he “found Judge Kavanaugh to be a qualified jurist” but later faced shouts of “shame” from protesters.

Two Republican waverers, Susan Collins and Jeff Flake, have finally decided to back the judge. Mr Flake has been a frequent critic of Mr Trump but said he would vote yes, barring any major changes in evidence.

Oddly, Ms Murkowski will also separately be counted for a “yes” vote. Under Senate rules she can mark herself as “present” for a senator who is unable to attend. Steve Daines, who would have backed Mr Kavanaugh, will be at his daughter’s wedding.