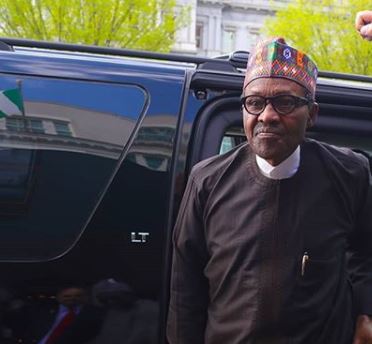 President Muhammadu Buhari has arrived Washington D.C. in readiness for a meeting with US President Donald Trump on Monday.

As a guest of the US Government, President Buhari is staying at Blair House, the US President’s guest house.

The Blair House used to be a complex of four formerly separate buildings—but a major renovation between 1950s and 1980s strung them together as a single facility.

The US President’s Guest House has been called “the world’s most exclusive hotel” because it is primarily used to host visiting dignitaries and other guests of the president. It is larger than the White House and closed to the public.

President Buhari will be the first African leader to be hosted by Donald Trump in the White House, since Trump came to power last year.

The meeting with Nigerian President Muhammadu Buhari on Monday comes after an uncomfortable start to the Trump administration’s approach to the world’s second most populous continent, one of which was the leaked Trump rant describing Africa as ‘shithole’.

Security and economic issues top the agenda for the bilateral meeting and working lunch.

Nigeria, Africa’s most populous country with almost 200 million people, is the largest economy on the continent and the leading crude oil exporter.

Buhari was one of the first two African leaders Trump called after he took power, along with South Africa’s president.