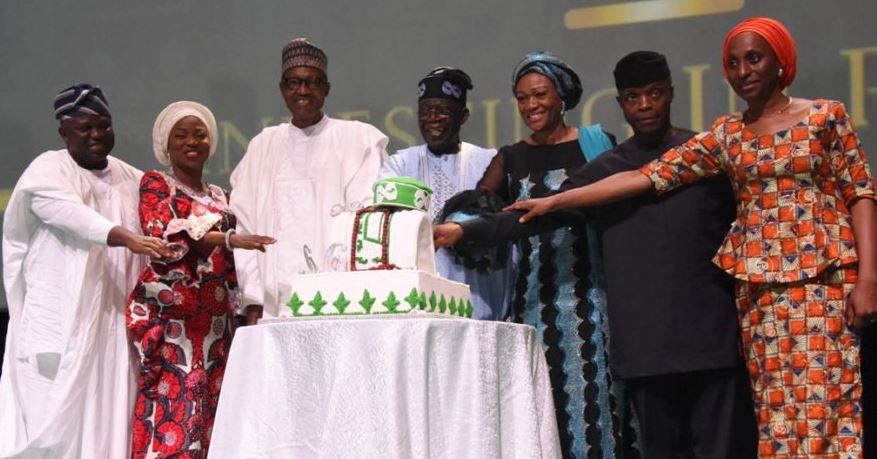 Speaking at the 10th Bola Ahmed Tinubu Colloquium, organised to commemorate the former Lagos Governor’s birthday, President Buhari described Tinubu as a political patriot who has over the years invested in building people and creating future leaders of tomorrow.

“I call on Nigerians to join me to celebrate Asiwaju, a man who is widely known as a political strategist and I have come to see him as a man who cares about people and is a fountain of ideas for the economy and for the common man and woman. He is a true democrat and we appreciate his contribution for Nigeria’s capital progress.

“Asiwaju has invested in people because he believes that tomorrow will be better than today and good will one day triumph over evil,” Buhari said.

Commending the concept of the Colloquium and describing the theme, ‘Investing In People’ as apt, the President said the Federal Government over the last two years had initiated programmes and policies that have made direct impact on the people, adding that the nation can only grow when government invests in its people.

Professor Osinbajo in his address said he was proud to have garnered experience in public service under the tutelage of Tinubu when he was Governor of Lagos State, noting that it was during that period the foundation of development currently ongoing in Lagos was laid.

He particular alluded to the concept of the Land Use Charge which Tinubu’s administration initiated, saying that despite the challenges and dissenting voices, he (Tinubu) successfully defended, a move which, according to him,  made Lagos better for it.

“When we introduced the Land Use Charge, which was the foundation of the development we see in Lagos today, some of us believed that it should not be introduced at all, others believed it should be introduced. I remember we were having a meeting in a small room, Asiwaju, myself, Yemi Cardoso, Wale Edun and some others and the argument got so heated that Asiwaju asked us if we were the ones the people elected.

“He stormed out of the room and we did not leave, we stayed there. After some minutes, he came back into the room and asked us why we were still there. Then we continued the discussion. In the end, we developed that law and it has become part of the success story in Lagos. This showed that Asiwaju is one leader who allows people to develop ideas,” Osinbajo explained.

The Vice President who also presented a discuss on the topic, ‘Linking the Philosophy To Governance and Commitment’, also described Tinubu as a “fighter and a champion of people- oriented courses.

In his welcome address, Governor Ambode said Tinubu’s era as Governor of Lagos from 1999 to 2007 showed the depth of his governance capacity, adding that he has over the years sustained his relevance in the nation’s polity.

“After his gubernatorial years, he has continued to show pivotal leadership, particularly on the national stage.  It is not for nothing that he is acknowledged for his defining role in the emergence of a progressive political party in Nigeria,” the Governor said.

He said there was no better birthday present that his friends and well wishers could give to him as befitting as what the theme of this year’s colloquium epitomized, saying that Tinubu’s legacy was built around his capacity to invest in people.

“The theme of this year’s colloquium is “Investing in People”. Whether it is called human capital development or people-centric investment, the meaning is clear enough and its importance is undeniable.  For us on the political landscape, it may well be the greatest governance challenge.  Creating highly impactful programs and policies for our people is my simple understanding of good governance.  At the end of the day, the level of investment on our people will determine our future sustenance as a Nation always.

“Look around you, there are only a few people that can match his (Tinubu) unquestionable thirst to invest in people.  It goes without any gainsaying that, I join numerous others seated here or outside, that have gained in the investment Asiwaju has made on people.  I am grateful for that,” Governor Ambode said.

He said the colloquium was not just a talk shop, but a veritable platform for the generation of ideas by all stakeholders on the need to invest in people, adding that the ultimate objective and expectation is for the forum to avail policy makers at all levels of government new ideas and perspectives and to enrich the process of policy formulation, design and implementation.

Besides, Governor Ambode thanked President Buhari for the support to the State and gracing the occasion as part of his activities to mark his two-day official visit to Lagos, just as he expressed optimism that the historic visit would be more beneficial to the State on the long run.

In his response, Tinubu thanked President Buhari and the host of dignitaries including several Governors, members of the National Assembly, Ministers, members of the diplomatic corps, among other stakeholders for finding time to grace the occasion, saying that he was highly honoured by their presence.

Tinubu, particularly lauded the strides of Governor Ambode, assuring him that he would continue to support his administration as it continues to drive Lagos was on the right path of economic development.

“You (Governor Ambode) have been exceptionally committed to the progress and economic development of Lagos state and I can only say thank you. The act of many good jobs is more work and after beautiful challenges is more success. Work hard at it; we are in the booth together,” Tinubu said.