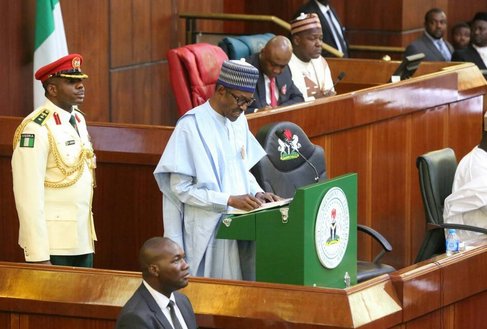 President Muhammadu Buhari on Wednesday unveiled a federal budget of N8.83trn for the 2019 fiscal year.

The figure came in the 2019 Appropriation Bill presented by the President to a joint session of the National Assembly in Abuja.

The News Agency of Nigeria reports that the 2019 total budget estimate is N300bn lower than the N9.1bn being implemented for the current fiscal year.

According to Buhari, N4.04trn or 50.31 per cent is earmarked for recurrent expenditure and N2.03 trillion representing 22.98 per cent earmarked for capital projects.

Other estimates are N492.36bn for statutory transfers; N2.14trn for debt servicing and provision of N120bn as sinking fund.

He explained that the sinking fund would be used to “retire maturing bonds to local contractors”.

The 2019 budget proposal is based on an oil production estimate of 2.3 million barrels per day and an exchange rate of N305 to a dollar.

Other benchmarks are: real Gross Domestic Product growth rate of 3.01 per cent and inflation rate of 9.98 per cent.

The total projected revenue, according to the president, is N6.97trn, which is three per cent lower than the 2018 estimate of N7.17trn.

“The estimate from non-oil revenue consists of N799.52bn from company income tax; N229.34 billion from value added tax, and customs duties of N302.5bn.

“We have reduced our expectations from independent revenue to N624.58bn.

“Other revenues expected in 2019 include various recoveries of N203.38bn; N710bn as proceeds from the restructuring of government equity in joint ventures, and other sundry incomes of N104.1bn,” he said.

The president explained that the total N8.83 trillion proposed expenditure for 2019 included grants and donor funds amounting to N209.92 billion.

Buhari said although the 2019 estimate was lower than the 2018 budget of N9.1trn, it was higher than the N8.6trn originally proposed by the executive to the National Assembly.

“This reduction is in line with our plan to progressively reduce deficit and borrowings over the medium term,” he said.