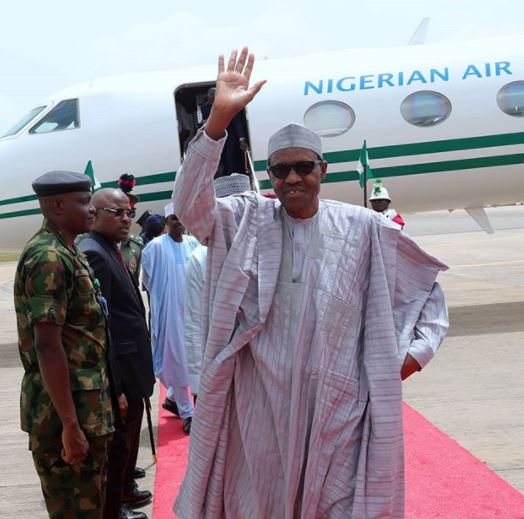 President Muhammadu Buhari returns to Abuja from Katsina and Daura after a condolence visit to the family of late Senator Mustapha Bukar. PHOTO; SUNDAY AGHAEZE. APRIL 8 2018.

President Muhammadu Buhari has returned to Abuja after a weekend trip to Katsina and his home town of Daura.

The presidential aircraft carrying the president and some of his aides took off from the Umaru Musa Yar’Adua International Airport, Katsina, at about 10.45a.m.

The aircraft landed at the presidential wing of the Nnamdi Azikiwe International Airport at 11.28a.m.

The Chief of Staff to the President, Malam Abba Kyari, the Minister of the Federal Capital Territory (FCT), Alhaji Muhammed Bello, some security heads and other presidential aides welcomed the President at the airport.

He also received no fewer than nine senators who also came on a condolence visit to The Bukars.

Buhari on a visit to Bukar’s family, said the deceased was his very close ally “in difficulties and in joy.”

“His death has deeply touched me personally and officially,” the President said, adding that Nigeria would miss the wisdom and political sagacity of Bukar.

Buhari prayed fervently for the repose of the soul of the deceased and urged the family to bear the irreplaceable loss.

He described Bukar as humble, honest, hardworking and a God fearing personality who placed national interest above all other considerations.

“He played politics with decency, decorum and understanding; his death is a personal loss to me and the nation in general.”