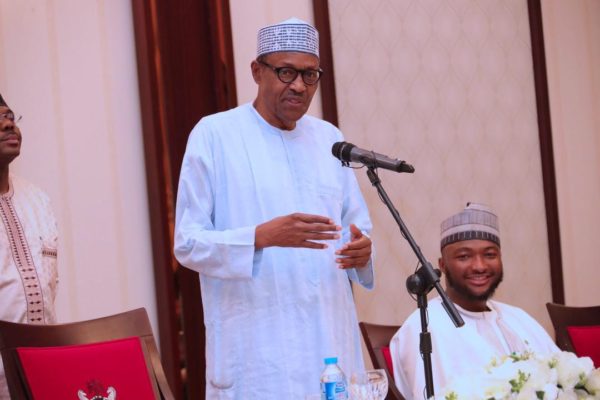 President Muhammadu Buhari has urged Nigerians to overcome greed and stop glorifying thieves. Instead, he wants Nigerians to treat the thieves with disdain.

The President made the appeal in his Eid-el-Fitr message, just days after a Federal High Court jailed a former state governor and serving senator for abuse of office and theft of public funds, provoking debate in the social media as to why the man should have been jailed at all!

The President’s message which focussed on the lessons of Ramadan, urged muslims to reflect on the importance of Ramadan in becoming good ambassadors of Islam at all times.

“Religion should be the moral compass for all believers in their public and personal lives,” adding that “if people allow the teachings of their religions to influence their conducts, problems such as corruption, which diverts public funds to private pockets, would have been eliminated in the society.”

He regretted, however, that “selfishness and greed have overcome people’s conscience so much that they don’t have moral inhibitions in the pursuit of their greed.”

“I always wonder why any true believer, be they politicians, civil servants or businessmen, would seek to make profits from the misfortunes of others.’’

He thus urged ordinary Nigerians to stop glorifying thieves by treating them with disdain for bringing hardships to others.

Buhari expressed appreciation to Nigerians for their patience and assured that their sacrifices would not be in vain.

Buhari said that reforming a country that had been pushed to the brink of near decay on account of corruption, was always going to come with pains.

He said: “But these pains are temporary, the APC administration which I am privileged to lead, is beholden to the ordinary Nigerians and will leave no stone unturned to make their security, welfare and happiness our priority.’’

President Buhari enjoined religious leaders to always pray for peace and unity in the country and avoid making inflammatory utterances that endanger peace or promote conflicts.

The President also appealed to fellow citizens to forgive one another and embrace peace.

In this respect, President Buhari lauded the families of recipients of national honours for showing good examples to Nigerians and urged our country men and women to copy their good examples.