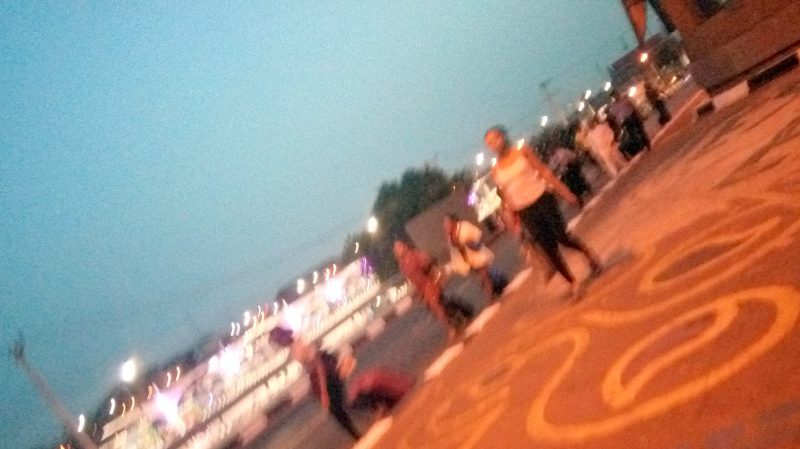 The action caused pain to travellers, with some walking about two kilometres to get to the airport so as not to miss their flight.

When a PREMIUM TIMES reporter got to the General Hospital Ikeja at 5 a.m., dozens of armed police officers laid siege at Olowu bus stop to stop cars from moving.

Some passengers who spoke with PREMIUM TIMES described the action an act of infringement on people’s right.

“Is this the change we voted for?” said Kabir who kept walking fast while talking saying he did not want to miss his flight.

“This is not funny again, how can they shut the whole place down when the president’s flight is 11:30 a.m., this is wrong,” said Beauty, another passenger.

Samj Ehigiamusoe, a passenger flying from Lagos to Abuja, also condemned the situation.

“How can Lagos State Government decide to lose money because a president is coming and how can a president allow his people suffer like this,” Mr ehigiamusoe

Meanwhile Roseline Oguh who is traveling from Lagos to Uyo said the hardship is unbearable.

“This is not palatable at all,” she said after arriving the airport. ” I left my house 4 a.m., but trust Nigerians, they will always find a way around it,” she said.

PREMIUM TIMES reported how the Lagos State Government declared Thursday a work free day in the state ahead of the president’s two-day visit to the state.

As at the time of the report, our reporter who was also travelling had trekked for about 2.6 kilometres.

Meanwhile, officials of the Nigerian Army seized the reporter’s phone demanding she delete the pictures taken of the situation at various points.

At the airport, Charles, a staff of Dana airline told PREMIUM TIMES that all the airline’s flights will be delayed till 12 noon, after the president’s arrival.