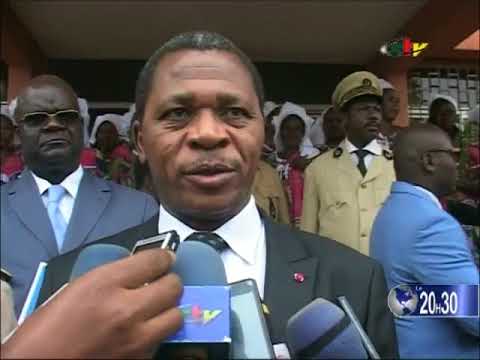 The Cameroon government will not dialogue with separatists elements in the country’s Anglophone region, Interior Minister Paul Atanga Nji has stressed.

Speaking late last week on state-owned Cameroon Radio Television, he reiterated a position he had advanced in late March that Yaounde will deal with persons advancing the continued unity of the nation.

He told host of the political talk show, Actualite Hebdo, that president Paul Biya had placed security as a top priority because without it, Cameroon will not be an ideal investment environment.

According to him a thirty day grace period will be opened for separatist elements to lay down their arms, failure to do so, “it is the law that will take its course,” he said.

On the subject of separatists leaders deported from Nigeria to Yaounde early this year, he said they were doing fine in detention, buttressing an earlier position advanced by Information Minister, Issa Tchiroma Bakary in an interview with RFI.

The Minister has been on a national tour since he was worn in. He has been to both regions in the Anglophone area – the northwest and southwest, calling on people to support the government’s peace efforts.

Atanga, one of two Anglophones who were handed positions in the government following a cabinet reshuffle in early March 2018. he was handed the Terrirtorial Administration portfolio whiles Dr. Nalova Lyonga was named Minister of Secondary Education.

What has become known as the Anglophone crisis, has riled the country’s two English-speaking regions. A previous cry against discrimination and marginalization from French-majority Cameroon has now taken a violent turn.

Secessionists under the so-called Ambazonia Republic continue to push for a breakaway from Cameroon – a move the government has flatly rejected. After a crackdown on protests in October last year during a planned symbolic independence declaration, the secessionists turned to arms.

The call for dialogue has continually been made by several countries and groups but has yet to be seriously pursued. A number of the separatists leaders have been arrested and deported from Nigeria since January but they have yet to appear in court.

The humanitarian crisis arising from the situation has also led to Cameroonians fleeing the Anglophone regions in their thousands. The United Nations refugee agency has openly tasked parties to use dialogue to avoid further escalation of the crisis.