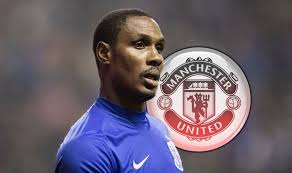 Odion Ighalo has been handed the no.25 squad number at Manchester United after the lifelong Reds supporter joined the club on a six-month loan deal from Shanghai Greenland Shenhua.

That shirt has been vacant since Antonio Valencia left Old Trafford in the summer, bringing an end to his 10-season career as a United player.

A temporary move for the 30-year-old striker was completed on Friday and the 2019 Africa Cup of Nations top scorer is set to bolster Ole Gunnar Solskjaer’s squad for the remainder of this season, providing a different option in attack.

Ighalo’s debut, in theory at least, could be made when the Reds return from the winter break with a hotly-anticipated Premier League match against Chelsea at Stamford Bridge on Monday 17 February.

That game is followed by the Europa League round of 32 matches against Club Brugge and, coincidentally, a top-flight game against his former club Watford.