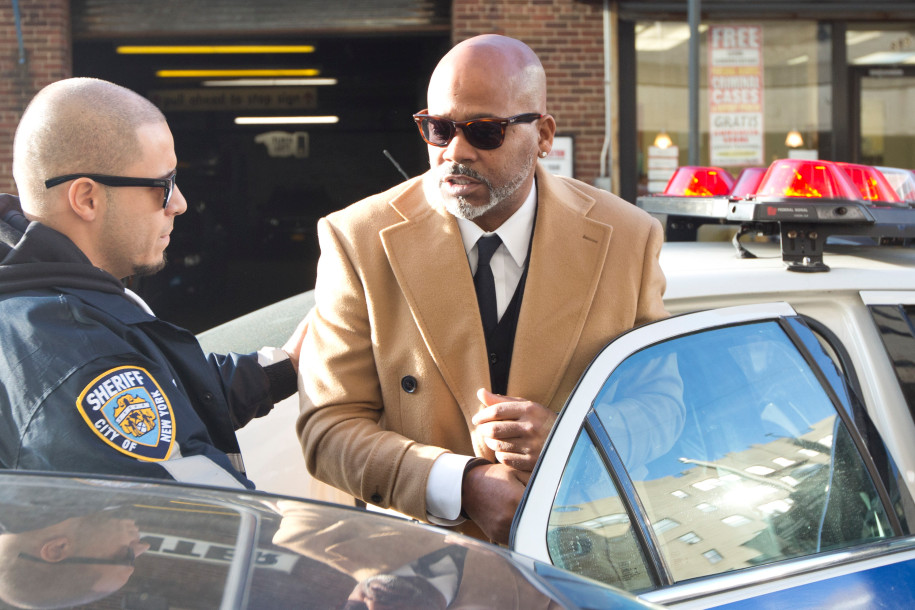 Dash, who is best known for founding Roc-A-Fella records with Jay-Z, was led into Bronx Family Court in cuffs after two felony warrants were issued for his arrest, the New York City Sheriff’s Office confirmed.

“We’ve been looking to arrest him since 2015,” NYC Sheriff Joseph Fucito said, confirming the former record executive was nabbed in Manhattan without incident.

Authorities have spent the last four years trying to convince Dash to turn himself in after he fled New York, one law enforcement source said.

The 49-year-old is accused of owing hundreds of thousands of dollars in child support to his two baby mamas but says he is broke — filing legal documents last week claiming he has no income.

The sheriff’s office confirmed the arrest warrants were issued in relation to the $404,000 in child support that Dash owed to ex-wife Rachel Roy and baby mama Cindy Morales.

On Wednesday, Dash emerged from family court holding hands with his fiancee Raquel Horn — two lawyers and a private film crew in tow — and ranted about how he had been crucified “just like Jesus Christ” while claiming he had paid the child support and had no cash flow problems.In April 2015, a Bronx family court judge issued an arrest warrant for Dash — ordering him to pay $62,000 to Morales. This year, a Supreme Court divorce warrant was issued for Dash after he was found guilty of contempt of court and was ordered to pay $342,000 to Roy.

“Ain’t no money problems,” the mogul said, dressed in dark shades and a camel coat, as a small crowd of fans gathered outside court.

“I went to turn myself in with money! I already paid it! And I still walked it with cuffs,” he railed, adding: “No more warrants. Everything is clear.”

But in a filing in Manhattan federal court last week, Dash said his personal income was “virtually nonexistent” and claimed his only revenue stream was payments from “Empire” creator Lee Daniels who owed him $2 million.

Dash, a father of three, said he was facing additional unexpected expenses because his current fiancée, Raquel Horn, was pregnant.

In November, Daniels and Dash settled a $2 million feud over claims Dash was cut out of producer credits and profits on the hit series — with Daniels agreeing to pay the music producer in installments.

But in his Manhattan filing, Dash said the money hadn’t been forthcoming and claimed the payments had been held up because creditors were garnishing his income.

“It is very difficult to address the mounting bills until I receive some relief from the courts,” he wrote.

On Wednesday, the record executive accused both his baby mamas of gouging him for cash.

“They’re pieces of dog s–t because they put money before family values,” Dash said. “I’m very disappointed in Rachel in not caring about her children, relationship with her children, before bread. It’s all been about money.”

Attorneys for Dash, Roy and Morales did not immediately respond to request for comment.