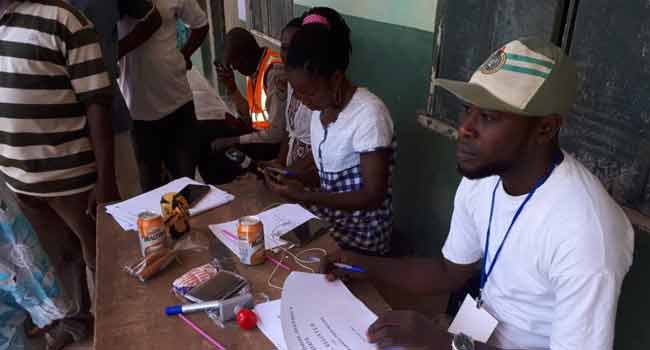 The Independent National Electoral Commission (INEC) on Saturday began the verification exercise for the recall process.

The exercise is taking place across the local government areas in Kogi West Senatorial District of the state where the lawmaker represents in the National Assembly.

The verification exercise taking place today is consequent to the meeting of stakeholders convened by INEC on Wednesday in Lokoja, the Kogi State capital.

According to a timetable released by the electoral umpire, the outcomes of the exercise will be declared on Sunday, April 29.

Against apprehensions that Card Readers might malfunction and mar the recall process of Sen. Dino Melaye (APC-Kogi West), verification officers have confirmed their effectiveness in the exercise.

The News Agency of Nigeria (NAN) correspondents who monitored the verification exercise in Lokoja and Kogi Local Government Areas on Saturday also confirmed adequate security and peaceful conduct of the exercise.

The polling Officer at Ukwo-Okoriko Compound, Ward A, Unit 003, Koton-Karfe, Musa Iliasu and Sen. Dino Melaye verification agent at the unit, Imam Sani said the cards readers did not malfunction throughout the exercise.

Patricia Aifakokhan, the NYSC Polling Officer at Lokoja Ward B sharing the views of her contemporaries in other units confirmed that the card readers functioned perfectly.

Administrator of Kogi LGA, Mohammed Tanko Musa, said he was impressed with the orderly conduct of the exercise adding that though the township witnessed low turnout, reports from the hinterlands would be different.

Meanwhile, the senator is currently receiving treatment at the National Hospital in Abuja following injuries probably sustained when he jumped out of a police vehicle to escape arrest.

He was arrested to face trial in Kogi over allegations made by some hoodlums who alleged that the senator supplied them with weapons.

NAN correspondent who visited the national hospital observed that no fewer than 20 officers and men of Nigerian Police Force were seen in and around the trauma centre where the Senator was receiving the treatment.

NAN reports that in spite the ongoing strike embarked on by health workers, some doctors were attending to the injured senator.

The senator was earlier taken to Zankli Medical Centre in Utako District in Abuja and later moved to national hospital.

NAN correspondent, who was at the hospital on Friday, was denied access to see the injured Melaye but a source from the hospital that preferred anonymity said the senator was recovering.

Reacting, the Spokesperson of the hospital, Dr Adetayo Haastrup told NAN that the senator was in a stable condition in the hospital.