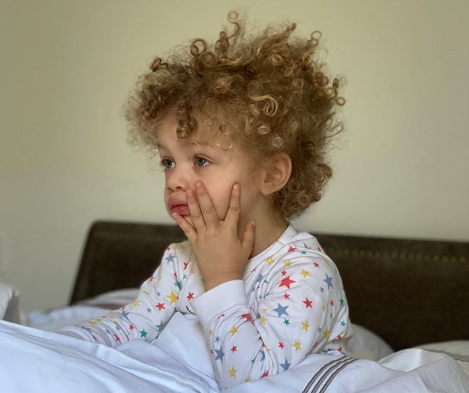 On Sunday, the rapper shared a picture of his sleepy-faced toddler in bed, and captioned it, “Happy Fathers Day to all the real g’z handling business 🌍”

Drake, 33, also posted a video on his Instagram Story that showed him opening up gifts, which included two pieces of art. Brussaux, 30, is a well-known painter.

Meanwhile, Adonis, 2, appears distracted by a present his dad got him: a blow-up, outdoor basketball hoop.

Drake first revealed to the world what his son looked like in March.

The “God’s Plan” rapper explained on “Young Money Radio” why he decided to share the photos.

“I just felt like, it wasn’t even anything I talked to anybody about or anything I planned, I just woke up one morning and was like, ‘You know what, this is just something that I want to do,’ he said. “I don’t want to feel like just because of a life choice I made to be a ‘celebrity’ that I got to make everybody live under this blanket.”

Drake and Brussaux welcomed Adonis is 2017.

The former “Degrassi” star admitted he was a father on his 2018 album “Scorpion” after Pusha T called him out for fathering a secret son in the track “The Story of Adidon.”

Happy Fathers Day to all the real g’z handling business 🌍