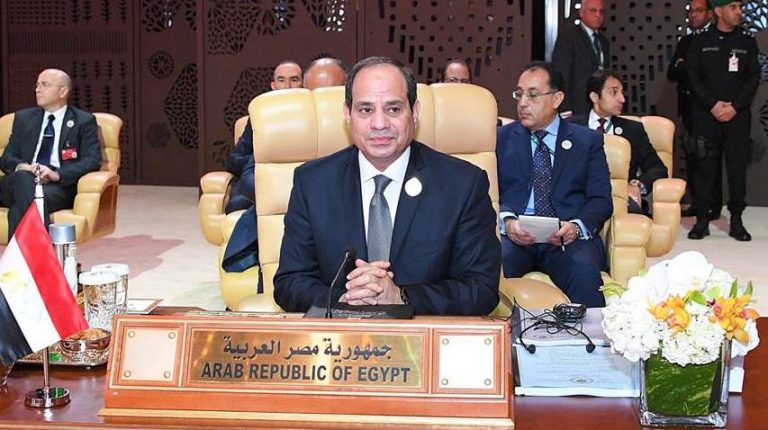 Al-Sisi said that the summit comes as some Arab countries are facing plots that target their existence, adding, “there are some regional countries” that have been aiming to build “areas of influence.”

“Unfortunately, some of the Arab brothers have plotted to support and finance sectarian terrorist groups,” he explained.

He emphasised that the discussions should be focused on the Palestinian issue, adding that Palestinian political factions should unite in order to participate in the peace process.

Concerning Libya, he asserted that Arab countries should not permit the political sphere in that country to be a scene for regional conflicts. Meanwhile, on the Yemeni crisis, he stressed that a political solution is needed. He also condemned the use of ballistic missiles by the Houthis.

The summit, titled Arab Reunification, discussed several issues that will be at the forefront of discussions, including the situations in Palestine and Syria, as well as the Libyan crisis and the issue of alleged Iranian interference in Arab affairs. The summit was postponed from last month due to the Egyptian election.

Head of the Syrian Republic—where several conflicts are currently taking place—Bashar Al-Assad has not taken part in the summit since 2011, when the 22-member organisation suspended his country’s membership.

Qatar’s delegation was headed up by Doha’s permanent representative to the Arab League, rather than a senior official of the state’s emir, a sign that the regional tensions between the country and some of its Arab neighbours remain high.

The weekend’s airstrikes in Syria and the country’s seven-year-long civil war are also expected to bediscussed. While Saudi Arabia backed the strikes, league members Lebanon, Morocco, and Egypt denounced them.

In addition, the summit is the first to take place since US President Donald Trump announced his plans to move the US embassy from Tel Aviv to Jerusalem, a decision roundly criticised by Arab states and their citizens.

During the summit, Palestinian President Mahmoud Abbas said that the United States is not a mediator in the conflict, but rather, a side.