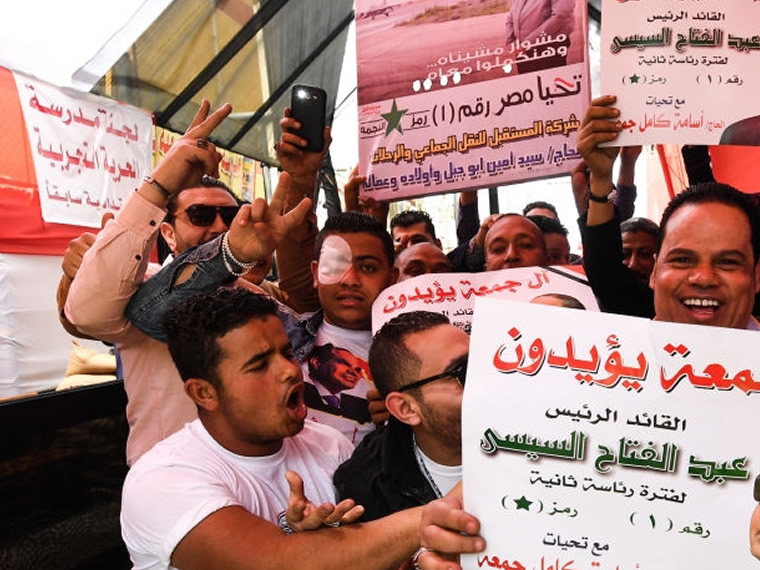 Egyptians headed to the polls on Monday in a presidential election to choose between incumbent Abdel Fattah Al-Sisi and a politician on Monday.

The president was among the first voters, shown on Egyptian television casting his ballot at a school in Cairo’s Heliopolis district under tight security.

Voters turned up early at polling stations and queued to cast their votes. Outside some stations, musical troupes showed up to celebrate the election.

Security forces were deployed across the country to protect polling booths and armoured vehicles were stationed at several points around Cairo. “Nothing will scare the Egyptian people. Not terrorism or anything else,” Prime Minister Sherif Ismail told state television after casting his vote.

The Daesh group’s Egyptian affiliate, which has killed hundreds of soldiers and civilians, has threatened attacks on election infrastructure. On Saturday, two policemen were killed in a car bomb attack targeting the provincial head of security for the northern Alexandria governorate. The security chief was unharmed.

Some 60 million people in Egypt, the most populated Arab country, are registered to vote on March 26, 27, and 28. Official results are expected on April 2.

They will have the choice between Sisi and Moussa Mostafa Moussa, who registered immediately before the close date for applications.

“I call on everyone to participate strongly during these three days,” he told reporters before casting his ballot.

In an interview broadcast on Egyptian television last week, 63-year-old Sisi said the lack of serious opponents was not his doing. “I wish we had one, or two, or three, or 10 of the best people and you choose however you want,” he said.

In that election, Sisi faced Hamdeen Sabbahi, an established left-wing politician much better known than Moussa. Sisi won with 96.9 per cent of the vote.

With Sisi’s victory effectively guaranteed, authorities will be hoping for a large turnout to enhance the vote’s legitimacy.

The governor of the northern Behaira province, Nadia Abdo, told a television station that she said to district heads “tell people that the district with the most votes cast will have water, sewage and electricity.” Sisi has stressed in his pre-election appearances the importance of voters turning out in large numbers.

During the campaign, Sisi appeared frequently on television and in newspapers, hailing factories and infrastructure projects built over the past four years.