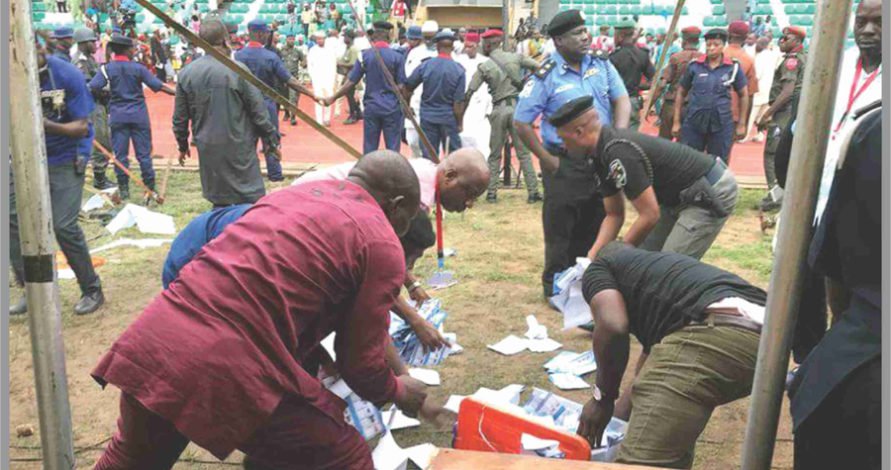 The stalemated All Progressives Congress (APC) Governorship primary in Ekiti State, which was earlier in the day marred with violence over alleged fraud being perpetrated by one of the leading aspirants, has been postponed indefinitely.

The News Agency of Nigeria, (NAN) reports that before the decision was taken, there was a serious violence at the Oluyemi Kayode Stadium, venue of the exercise, as agents of some strong contenders accused some security agencies of allegedly compromising the process in favour of former Governor Kayode Fayemi.

The Chairman of the APC Primary and Nasarawa State Governor, Alhaji Tanko Al-Makura hurriedly entered his vehicle and left the venue after an emergency meeting with all the 33 aspirants, failed to yield result.

Though Almakura did not officially brief the press on the pact reached with the aspirants, NAN learnt the the need to extract commitments from them for a peaceful conduct in future topped their discussions.

Confirming the postponement, two of the aspirants, Mr.Bimbo Daramola and former Speaker, Mr.Femi Bamisile, said it was a unanimous verdict at the meeting that the process should be suspended indefinitely.

“There was an issue somewhere about the exercise and they raised observation about sharp practices that had compromised the process which led to protest and the feeling was that the process should be suspended to avoid bloodshed”, he said.

He dismissed insinuation that it was because Fayemi was leading with a wide margin in about five, out of the 16 local governments that caused the violence.

“I don’t believe that is correct. The results have not been counted , so that was an assumption .

“Ekiti APC is not in any way fractured, we are one big family. If Fayemi defeats us, we are all going to back him, because the party is supreme. But this must come through a free, fair and credible process”, he said.

NAN reports that only delegates from four local governments had concluded their voting and delegates of the fifth council were about to vote when the violence erupted .

Trouble started at about 5.30pm when some agents raised observations about how the process was being allegedly compromised , accusing the men of the Department of State Services(DSS) of dictating to delegates who they should vote for.

Police and other security agencies shot sporadically into the air when the situation was escalating into a full scale war among the camps.

When the violence broke out at Oluyemi Kayode Stadium , venue of the exercise, many of the delegates scampered out to seek refuge in the nearby buildings, They never returned.

It was learnt all efforts made by by the Al-Makura -led committee that supervised the failed primary, to calm down frayed nerves were rebuffed.

NAN reports that protesters , most of whom were agents of the other 32 aspirants accused an agent to Fayemi , Mr. Samuel Abejide of dictating to delegates who to vote for and also writing the serial numbers of their ballot papers to authenticate who they actually voted for, probably for pecuniary gains after the poll..

The protest attracted their principals and other interested parties, who joined the fray and made spirited efforts to grab the ballot boxes to stall the entire process.

The Director General of Babafemi Ojudu Campaign Organisation, Chief Ranti Adebisi complained that the process had been heavily compromised

“The guideline stipulated that each aspirant can only bring in four supporters, but Fayemi brought many. His agents, including DSS were issuing cards to delegates to fill when they vote for him , so that they can later come for the money he promised them

“I contested against Fayemi in 2007 and I knew what I am talking about. The process has been compromised. Even, Fayemi has been bragging around that he is a friend to Alhaji Tanko Al –Makura, so we are disappointed that this could happen”, he said.

But reacting, Fayemi’s agent said it was gang up against the Minister that led to the spurious allegation, accusing those peddling rumour as enemies of APC.

“It was a proviso that if you are a delegate who can’t read and write, you can call any of the agents. When they saw that I was the one being called, they started feeling the heat and they were determined to disrupt it”, he said