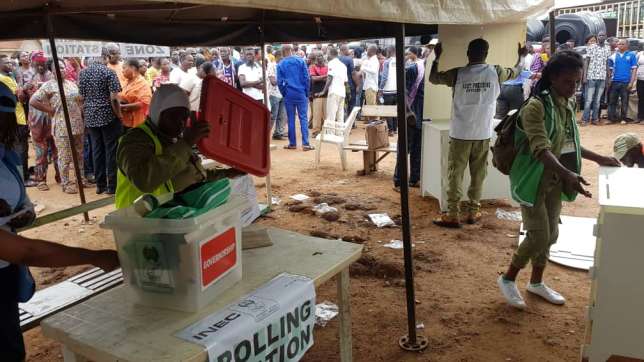 Impressive turn-out of voters on Saturday was the hallmark of the governorship election in Ekiti state on Saturday and results may be announced earlier than expected as voting has been seamless in many polling units.

Many voters turned out at most polling centres across the 16 Local Governments and 177 Electoral wards in the state, despite initial apprehension few days to the poll. There were only a few hiccups with the card reader.

The elements also favoured the polls as there was no sign of rain in the towns and villages.

In every place visited, the voters formed long queues as security agents stood by, monitoring the exercise.

There was no complaint about late arrival of voting materials.

NAN reports that the only problem was controlling the crowd of voters who kept trooping to various voting venues.

However, there were incidents of altercations over open inducement of voters.

But none of the 35 participating parties owned up to the inducement allegation, as the parties traded blames.

NAN learnt that highest money doled out as inducement in some instances was N5,000, while the lowest was N3,000.

At Iyin-Ekiti, hometown of former Gov. Niyi Adebayo who is a newly elected Deputy National Deputy Chairman, (South) of APC, elections went on smoothly in the two wards in the town.

Voting was was peaceful also at Ise-Ekiti, hometown of a former Works Minister and a former gubernatorial aspirant under PDP, Mr. Dayo Adeyeye. Scores of eligible voters that trooped conducted themselves peacefully.

NAN reports that Adeyeye, who came out to vote at about 9:30am, commended the voters, security agents and INEC.

Adeyeye switched to the All Progressives Congress after the PDP primary, accusing the incumbent PDP governor of hijacking the exercise