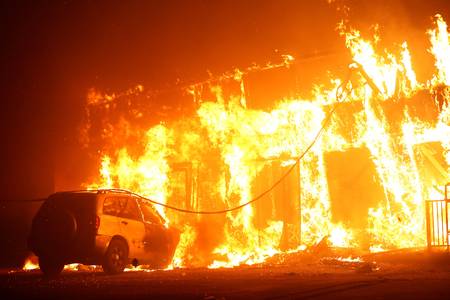 A fierce wildfire racing across Northern California has destroyed parts of the Sierra foothills, including one town, officials say.

According to the state’s wildfire agency Cal Fire the fire prompted the evacuation of the entire town of Paradise, California, as well as Magalia, Concow, Butte Creek Canyon and Butte Valley.

Tens of thousands of people were forced to evacuate their homes on Thursday due to a fast-moving wildfire in northern California, called the ‘Camp Fire’ by local officials.

The Camp Fire, which started on Thursday, has torched dozens of homes and put some 15,000 structures under threat as a state of emergency was declared in Butte County.

Fanned by strong winds, the fire broke out around dawn and spread quickly, leaving the town of Paradise, population 26,000, choking on floating ash and thick smoke. There, in a matter of hours, the flames destroyed dozens of homes, a hospital and a gas station.

A spokesman for Cal Fire told the media that dry conditions and winds in the state were exacerbating wildfire-prone conditions, and making it difficult for firefighters to battle the blaze. At least two firefighters were reportedly injured Thursday fighting the fire, but official injury reports were not yet available.