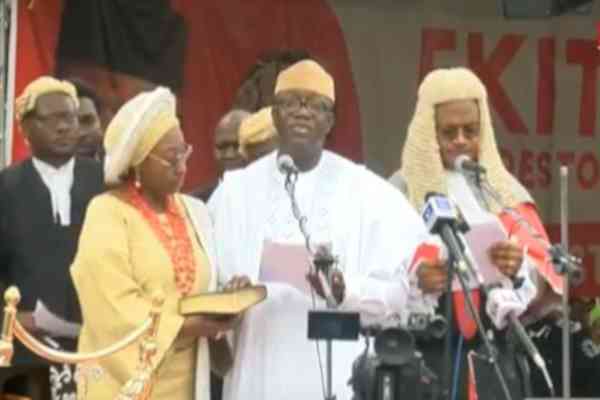 Former Minister of Solid Mineral, Dr. Kayode Fayemi, has been sworn-in as the Ekiti state governor by Justice Ayodeji Simeon Daramola, the Chief Judge of the state.

Fayemi, was former governor of the state between 2010 and 2014, and regain the seat on the platform of All Progressives Congress (APC).

He defeated the Peoples Democratic Party’s (PDP) candidate, Prof. Kolapo Olusola, and 33 other candidates to win the governorship election.

The 53-year-old governor is a native of Isan-Ekiti in Oye Local Government of Ekiti State.

He was defeated by Mr Ayodele Fayose in 2014.

The new deputy governor, Chief Bisi Egbeyemi, was first to take the oath of office.

After taking the oath of office for his second coming to finish his eight years tenure, Fayemi inspected a guard of honour mounted by the police.

Among political leaders at the inauguration of the governor were the Mr. Boss Mustapher, the Secretary to the Government of the Federation and Governor Nasir El-rufai of Kaduna.