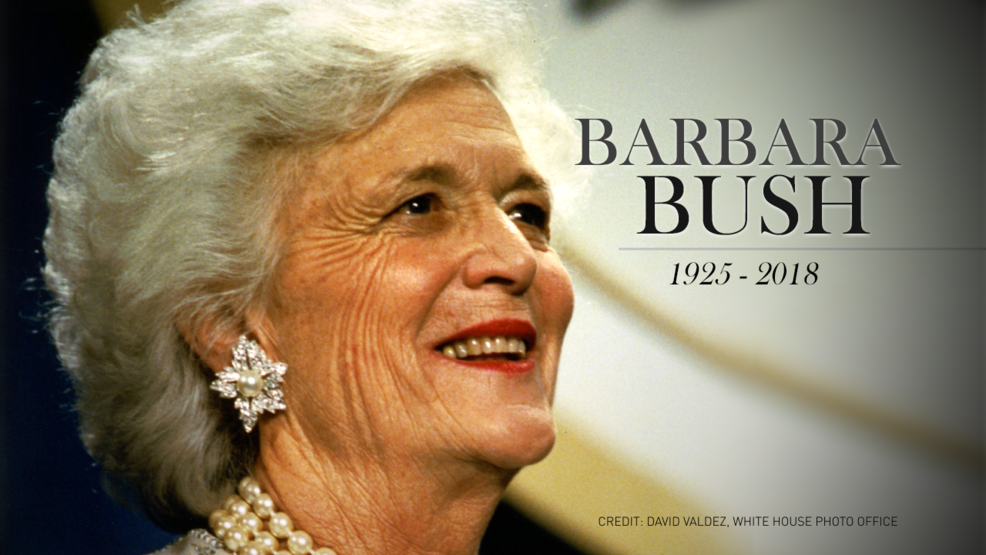 On Sunday, a family spokesperson said Mrs. Bush was in declining health and had decided not to seek additional medical treatment to prolong her life. Instead, the family said she was focusing on “comfort care”after consulting with her family and doctors.

No specific information about her condition was given, but the former first lady had been undergoing treatment for chronic obstructive pulmonary disease and congestive heart failure in recent years. She also had been treated for decades for Graves’ disease, a thyroid condition.

“My dear mother has passed on at age 92. Laura, Barbara, Jenna, and I are sad, but our souls are settled because we know hers was,” George W. Bush said in a statement Tuesday. “Barbara Bush was a fabulous First Lady and a woman unlike any other who brought levity, love, and literacy to millions. To us, she was so much more. Mom kept us on our toes and kept us laughing until the end. I’m a lucky man that Barbara Bush was my mother. Our family will miss her dearly, and we thank you all for your prayers and good wishes.”

Barbara Bush’s funeral will be held Saturday at St. Martin’s Episcopal Church, where she and former President George H.W. Bush have been devoted members since the 1950s. She will be laid to rest at the George Bush Presidential Library.

She was born Barbara Pierce on June 8, 1925, to her parents, Pauline and Marvin Pierce. Her father was the publisher of McCall’s and Redbook magazines. She grew up in Rye, New York before going on to boarding school at Ashley Hall in South Carolina.

It was at a dance on her Christmas vacation at the age of 16 when “Bar,” as her friends and family called her, first met George Bush, who was then a senior at Phillips Academy in Andover, Massachusetts. Little did she know, she would be married to him for 73 years and their love story would truly become one for the ages.

After a year and a half of long-distance dating, they were engaged just before he shipped off to serve as a naval pilot in World War II after he enlisted on his 18th birthday. By the time he returned on leave, Barbara had dropped out of Smith College.

George Bush was the youngest pilot in the Navy when he got his wings, flying 58 combat missions during World War II. On Sept. 2, 1944, he was shot down by Japanese antiaircraft fire during a mission over the Pacific Ocean and a U.S. submarine crew rescued him from the water. His two crewmen were killed. George Bush was honorably discharged from the Navy in September 1945 and was awarded the Distinguished Flying Cross.

He went on to earn an economics degree from Yale University and then moved to Texas with Barbara and their oldest son, George W., to begin a career in the oil business. Like his father Prescott Bush, who served as a U.S. Senator from Connecticut, he became interested in politics and public service.

The journey to the White House

George H.W. Bush would serve two terms in Congress representing the state of Texas, and he ran twice for Senate, though unsuccessfully. After that, he held a number of high-level positions including U. S. Ambassador to the United Nations, Chairman of the Republican National Committee, Chief of the U. S. Liaison Office in the People’s Republic of China, and Director of the Central Intelligence Agency.

In 1980, George H.W. Bush campaigned for the Republican nomination for president and lost, but was chosen as a running mate by Ronald Reagan and went on to become the vice president of the United States. Barbara Bush then served as second lady from 1981 to 1989.

He tried again and won the Republican nomination for President in 1988, and after defeating Michael Dukakis in the general election, George H.W. Bush was sworn in as the 41st President of the United States on Jan. 20, 1989 with Barbara by his side as first lady.

Barbara Bush was one of the most beloved first ladies in American history, in the eyes of both the public and the press. She earned their respect with her friendly, forthright manner.

While serving as second lady, she identified the promotion of literacy as a cause that would be important to her. As first lady, Mrs. Bush became involved with many organizations devoted to the cause, including her own Barbara Bush Foundation for Family Literacy, of which she became the honorary chairman. The foundation partners with local programs and had awarded more than $40 million as of 2014 to create or expand more than 1,500 literacy programs nationwide.

“The American Dream is about equal opportunity for everyone who works hard. If we don’t give everyone the ability to simply read and write, then we aren’t giving everyone an equal chance to succeed,” she said.

Along with her own memoirs, Mrs. Bush was also the author of “C. Fred’s Story” and “Millie’s Book,” based on the lives of her dogs. Proceeds from the books benefited adult and family literacy programs.

Always an advocate of volunteerism, Mrs. Bush devoted time to many causes in her lifetime, including AIDS, homelessness, school volunteer programs and the elderly.

Mrs. Bush was known for her white hair and for always wearing a triple strand of fake pearls around her neck. Her brown hair began to turn gray in the 1950s and she later said that dyed hair didn’t look good on her, crediting the color to the public’s perception of her being “everybody’s grandmother.”

The pearls sparked a national fashion trend when she wore them to her husband’s inauguration in 1989, and they became synonymous with the first lady, who later said she selected them to hide the wrinkles in her neck. The candid admission only bolstered her common sense and down-to-earth public image.

Through the years, the Bushes had four sons– George W., who became the 43rd President of the United States in 2001;  John Ellis– better known as Jeb– who was the 43rd Governor of Florida from 1999 to 2007; Marvin and Neil, and a daughter, Doro. Their second child, a daughter named Robin, died in 1953 at the age of 3 after battling leukemia — leaving the couple with a lifelong compassion. Barbara Bush has said, “Because of Robin, George and I love every living human more.”

Barbara Bush was one of only two first ladies to also be the mother of a president.

Over the years, the Bushes became grandparents 17 times and also have seven great-grandchildren.

During the first 44 years of their marriage, Barbara Bush managed a total of 29 different moves from place to place. In recent years, the family has called Houston, Texas home, where Mrs. Bush was always deeply involved in her community.

The Associated Press contributed to this report.