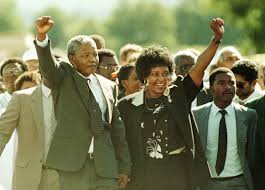 The Nelson Mandela Foundation has committed itself to continue to preserve the legacies left by Winnie Madikizela-Mandela and former president, Nelson Mandela.

The foundation is currently paying tribute to the late freedom fighter, Madikizela-Mandela at Constitutional Hill in Johannesburg.

Monday also marks 100 days before the centenary of Madiba which will be celebrated at his birth place Qunu, outside Mthatha in the Eastern Cape.

Hundreds of dignitaries, former freedom fighters and the Mandela and Madikizela families gathered at Constitutional Hill in Johannesburg to pay homage to the late Madikizela-Mandela.

Speaking on behalf of the Nelson Mandela Foundation, Nikiwe Bikitsha says: “We call on all of us to dedicate the next 100 days and beyond in honouring those legacies by serving the vulnerable in society.”

“To the Mandela family, we cannot dare imagine the pain you are going through but know you are in our thoughts.”

A friend of the late Winnie Madikizela-Mandela, Cecile Palmer has paid a moving tribute to the late struggle icon, saying the nation has lost a mother.

She says during their last encounter, Madikizela Mandela was not a happy person due to the continued ills of society including the abuse of women and children. Palmer appealed to the ANC to not further undermine the power of women in government.

“Here I want to challenge the ANC, I want to ask you directly: why is it that you put weak women as the head of women’s ministries…..(cheering) … it’s time that you got serious about what you are doing. Lets peal off all the scabs we have, and lets repair this country.”