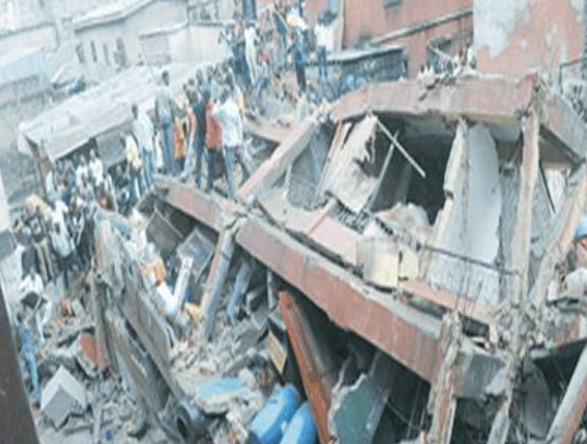 We learnt that injured toddlers are siblings, comprising twin sisters (Taiwo and Kehinde) and their brother, Idowu and another boy whose identity could not be ascertained at the time of filing this report.

It was learnt that the incident occurred at about 9.30 pm on Sunday when the emergency command and control room was alerted through the toll free line 767/112.
Confirming the incident, the General Manger, Lagos State Emergency Management Agency (LASEMA), Dr Olufemi –Oke Osanyintolu, said that those injured had been taken to the hospital for treatment.

According to him: “The Agency received the distress call at about 9.30 pm through the emergency toll free line 767/112 on Sunday 29th July, 2019. On arrival at the scene, it was discovered that a two-storey building at the aforementioned address partially collapsed injuring four children two girls (twins) and a boy (Idowu) of the same parents and another boy (with bruises). Further investigation revealed that the building had some cracks on the section that collapsed.
According to Dr Oke-Osanyintolu, the landlord of the ill-fated building identified as Pa Ayilara initially refused all entreaties to be moved out of the partially collapsed building, before he was later taken to Gbagada General Hospital.

Oke-Osanyintolu added that the building had been cordoned off after all the residents were evacuated by the emergency responders.

The LASEMA boss advised the owner of the structure to ensure that a holistic assessment is carried out by Lagos State Building Control Agency (LABSCA) before any repairs are made.