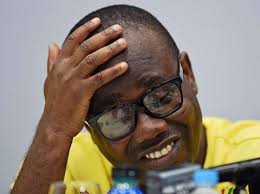 Ghana Football Association has debunked reports of an imminent change in leadership amid fraud allegations levelled against the body’s president Kwesi Nyantakyi.

The embattled FA chief has been charged with “defrauding under false pretences” on orders of Ghana president Nana Akufo-Addo after allegedly being captured in a video documentary using names of high-ranking government officials to defraud foreign investors.

Produced by renowned Ghanaian investigative journalist Anas Aremeyaw Anas, the documentary, which has already been previewed by president Akufo-Addo, is set for public screening on June 6.

“On Tuesday 22nd May 2018 there was an activation of the relevant state institutions to probe into an issues relating to the President of the Ghana Football Association, Mr Kwesi Nyaktakyi in the yet-to- be released documentary by Anas Aremeyaw Anas,” a GFA statement, signed by general secretary Isaac Addo, narrated.

“Though the President of the GFA was on official duties outside the country, he cut his trip short and returned to Ghana on 23rd May 2018.

“On his arrival he was escorted to the CID Headquarters where he was interrogated, a statement taken and subsequently granted bail.

“Presently he is helping the police with their investigations.

“The President remains innocent until he is proven guilty of all charges levelled against him.”

He is the current first vice-president of Caf,  Wafu president and member of Fifa Executive Council.

“The GFA President being a law abiding citizen respects the law, he is not a flight risk and has indicated his willingness and availability to the investigative authority anytime he is required to do so,” the statement continued.

“Following a meeting of the Executive Committee of the GFA on Thursday, the body wishes to state that nothing has changed in terms of the GFA hierarchy and Mr. Nyantakyi still remains the President of the Ghana Football Association.

“Any statement contrary to this must be disregarded.

“We wish to re-iterate that Mr. Nyantakyi has the full support of the Executive Committee of the Ghana Football Association (GFA).

“All offices and outlets of the GFA remain fully functional and we confirm that all scheduled activities of the federation continue without any hindrances.

“We urge all our stakeholders and members to remain calm during this period.”