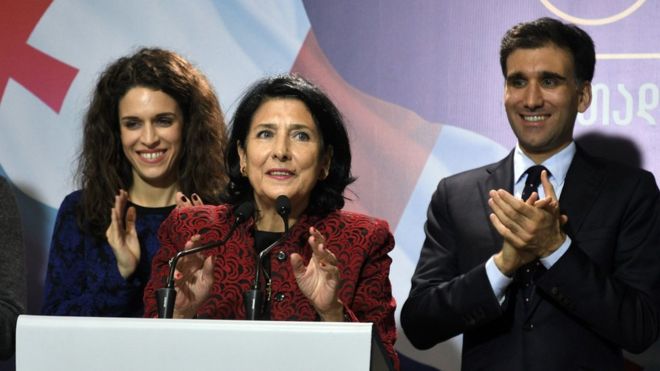 Georgia has elected its first female president and ruling party candidate Salome Zurabishvili, after an election the opposition has claimed to be a “fraud.”

According to The Punch,  Zurabishbili won with 59.52 percent of the votes in a second round of elections,  and the opposition candidate Grigol Vashadz  had 40.48% of the votes. Zurabishvili, a former ambassador to France, ran on the ticket of the ruling Georgian Dream party, which is backed by billionaire Bidzina Ivanishvili.

The election was seen as a test of Georgia’s democratic credentials as the Caucasus nation seeks European Union and NATO membership.

Georgia’s former president Mikheil Saakashvili who leads the alliance of 11 opposition parties that backed Vashadz, claimed “mass electoral fraud” even before official results were released. In statement he said  “The oligarch has stamped out Georgian democracy and the institutions of elections…I urge Georgians to defend our freedom, democracy and the law. I call on you to start mass peaceful rallies and demand snap parliamentary polls”.