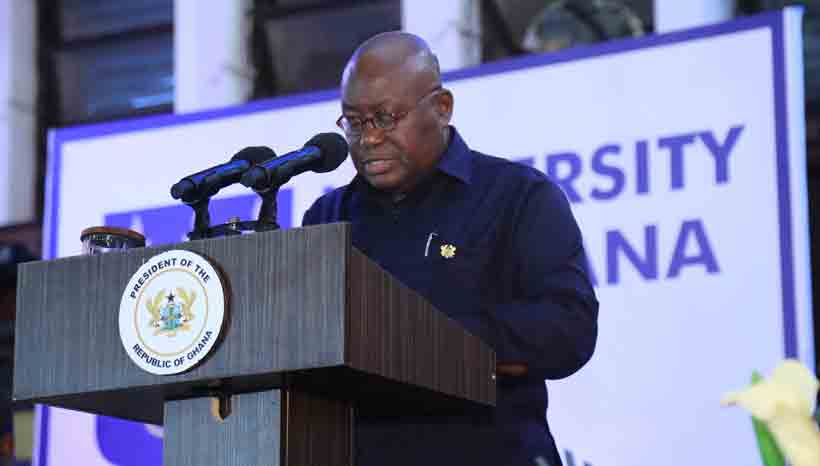 As part of its 70th anniversary celebrations, the University of Ghana, Legon, has launched a US $100 million Endowment Fund to augment government’s efforts to assist in the provision of additional facilities and resources to enhance research and teaching.

In response to the appeal, government has promised GH₵5 million from the Ghana Education Trust Fund (GETFund) to the university to assist it improve upon delivering on its mandate and its expectation of becoming the leading university in teaching and research in the sub-Region.

Delivering the keynote addressat a Fund Raising event, on Monday, President Akufo-Addo extolled the premier university for producing excellent and world-class human resource for the development of the nation and the world at large.

He said the university continued to be a pacesetter in scientific research and technological innovations to address the many challenges that confronted the country. The President recounted the Key role that Dr J B. Danquah played in the establishment of the university.

“70 years in the life of an institution is no mean feat. From a modest beginning in 1948, the University College of Gold Coast, as it was known, has evolved into one of the leading universities,” he stated.

President Akufo-Addo commended the university as a proud pacesetter that had mentored and nurtured several higher institutions and titans in the country.

President Akufo-Addo noted that the university continued to be in the centre of many scientific and technological innovations while the diversity of its research efforts and the potent in its various disciplines–Social and natural Sciences, medicine, Agricultural and environment and energy– had been internationally acclaimed.

The President said it was imperative and commendable, therefore, that the university established an endowment fund in its 70th anniversary to provide additional funding and resources to enable the university improve upon the delivery of its core mandate.This year, 2018, marks the 70th anniversary of the University of Ghana, as it is now known, which was established by Ordinance on August 11, 1948 as the University College of the Gold Coast. The University of Ghana, currently, has 24 colleges and a student population of over 31,000.

Three of the 5 Presidents of the 4th Republic– Professor John Evans Atta Mills, John Dramani Mahama and the current President, Nana Addo Dankwa Akufo-Addo– had been produced by the University.

In Commemoration of her 70th anniversary, it has established an endowment fund to provide additional non-restricted funding to supplement government funds to assist in the provision of additional facilities and resources to enhance research and teaching.

The University is poised to distinguish herself in the areas of research to make an impact both at the national and international levels.