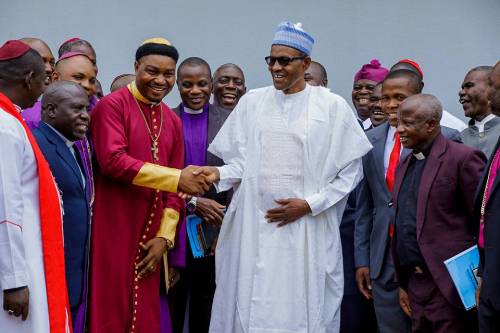 President Muhammadu Buhari has assured Nigerians that his decisions are taken on merit and he does not nurse any religious bias.

“Some voices, for political or ethnic reasons are making unguarded statements accusing the government and myself in particular of religious bias.

“Let me assure you, honourable clergymen that this is far from the truth,’’ he told a delegation of the Arewa Pastors Non-Denominational Initiative for Peace in Nigeria led by Bishop John Abu Richard.

He said in Abuja on Thursday: “In my career as a soldier, administrator, and politician, I have never veered from my oath of office.’’

“When I had the honour to lead a military government there were more Christians than Muslims in the Federal Executive Council and the Supreme Military Council.

“This was not by design but I appointed people on their merit without the slightest bias. The present Federal Executive Council is also evenly balanced; again not by design but by respecting and rewarding individual qualities.’’

Buhari therefore called on religious leaders to work towards the broader goal of building a strong and unified nation, and avoid insinuations that could divide the populace, especially along religious lines.

According to him, religious leaders have the responsibility of creating an enabling environment for peace and development to thrive.

He noted that he was delighted at the proposition to hold a one day prayer and fasting meeting for the nation on April 26, assuring that he would direct the Inspector General of Police to provide adequate security for the gathering.

In his remarks, the leader of the delegation said more than 45,000 pastors in the Northern part of Nigeria had registered with the initiative to use their pulpits for the propagation of the gospel of peace, and dispelling of political distractions.

He urged other pastors to support the administration as it works towards ending the violence in various parts of the country and avoid politically coloured sermons. (NAN)