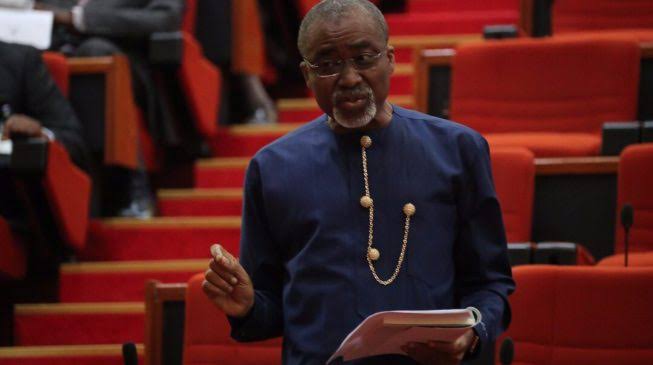 He made the call during plenary on Wednesday, while the Senate discussed a motion on national security challenges and the need to restructure the current security architecture.

Mr Abaribe, who was the first to contribute to the motion, faulted the president for failing to tackle the security challenges in the country.

He wondered why the president would claim to be surprised at the rising insecurity in the country.

Mr Abaribe also called out a presidential media aide for referring to the Christian Association of Nigeria as a political party after the body condemned killings by Boko Haram.

“When I was coming, I saw a newspaper headline of THISDAY, the commander-in-chief expresses shock at the level of violent crime, in other words Mr president was expressing surprise, but, according to our rules – Order 53(13), I will not go into that but I can only say in pidgin English ‘this surprise, surprise me.’

“I want to say, Mr. President, if you didn’t insist that we will not be partisan I’d have called out the presidential spokesman, Femi Adesina, who, when the CAN leaders complained about the killings of a priest, he turned around and said CAN was acting like a political party.

“Now that we are talking about it here, let me hear him say that all of us are acting like a political party when many are complaining about these incessant deaths in this country,” he said.

While stressing the need to “get to the root of this matter”, the lawmaker said, “those who live by propaganda will die by propaganda.”

At this point, he was interrupted by the Senate President, Ahmad Lawan, who asked the Minority Leader to “stick to the topic being discussed.”

But, Mr Abaribe continued: “Boko Haram has been defeated, Nigeria is now safer, everything that was being done to make sure that the hard work that was supposed to be done in securing Nigeria was not done because certain people did not do their work but preferred to cover the eyes of Nigerians with propaganda and trying to find all these excuses for non-performance, have now come to stare us in the face.

“When you want to deal with a matter, you go to the head, so we will go to government and ask this government to resign because they can no longer do anything,” he said.

He was again interrupted by Mr Lawan who warned him against being partisan.

“Let me remind you once again that Nigerians voted for APC in 2015 and because they saw improvement in their lives they voted APC again in 2019.

“I don’t want to be partisan and advise against hate speech,” the Senate President noted.

Making his final note, Mr. Abaribe said “government even said if ‘we don’t perform, stone us’, we are going with the stones to stone them now.”

This time, he was stopped.

A Nasarawa senator, Abdullahi Adamu, stood up to condemn Mr. Abaribe’s comments and demanded that he withdraw them.

The deliberations are still underway.

The lawmakers have set aside Wednesday to discuss security challenges in the country that have seen attacks by Boko Haram, kidnappers and so-called “bandits” increase, especially in the northern part of the country.

On Tuesday, Mr. Buhari said he was surprised at the growing insecurity, and said his government will be “harder” on bandits.

Amidst the insecurity, the presidency has said Nigerians have reasons to be grateful as the security situation is better than it was before President Muhammadu Buhari assumed office.

“We know what the situation was as at 2015 and we know what it is today. Despite the reversals in security, it is still not as bad as it used to be in this country,” Femi Adesina, President Buhari’s spokesperson, said recently.