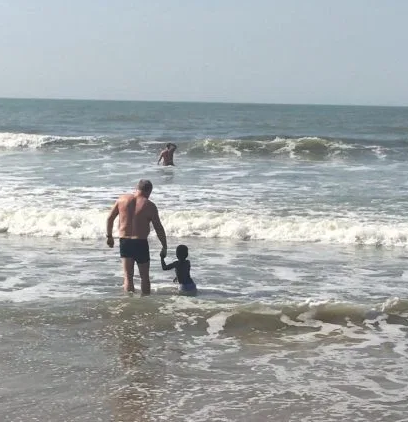 SUN’s undercover journalist was constantly shocked by the number of unaccompanied African minors he saw being cared for by middle-aged, Western men who did not appear to be their biological fathers.

The encounters witnessed included a girl aged between six and eight having lunch with a balding, white-haired man in a restaurant filled with similarly aged tourists.

The reporter also saw a stoutly built man in his 50s or 60s wading into the ocean gripping the hand of a tiny African child in white swimming shorts.

Equally unsettling was the sight of a Gambian toddler, no older than 2 years old, being held closely by a white man with a British accent. It was 11:30pm at night. The child watched wide-eyed with fear as a middle-aged white woman got into a fist fight with a young black prostitute at a popular beach bar.

Experts warn that the economic crisis unleashed by the collapse of travel firm Thomas Cook is helping turn the former British colony into a “paedophile paradise” where perverts can operate unchecked.

In an interview with The Sun UK, Lamin Fatty, the National Coordinator of the Child Protection Alliance in The Gambia, reveals that both male and female tourists are targeting African minors.

He warns: “Sex is cheap in my country and children are being sold for as little as 150 dalasis, or just over £2 in your currency.

“Some of the parents know their children are being abused and they accept it because they are so desperate for food in their bellies. Others are too naïve to realise. They think the Westerner is paying their bills and helping their boy or girl out of the kindness of their heart, while in reality, they have bad intentions.

“Child abuse is going on all the time in The Gambia and the government is not doing enough to put a stop to it.

“Our children are being approached directly on the beaches or the street and child abusers from all over Europe including the UK are coming here for this.

“I want to make clear that this does not just involve men but also adult women who are paying for sex with teenage boys in The Gambia.

“We have laws that are supposed to stop this from happening but they are not being enforced so we have become a paradise for paedophiles.”

Lawyer and children’s rights advocate Malick Jallow told Sun Online: “While some tourists will always want to help poor Gambians, others will see this situation as an opportunity to exploit young children.

“The problem is that the abuse is sometimes carried out with the blessing of the parents because they are so in need.

“The perception is that white people, or ‘toubabs’ as they call them, have stacks of cash and these parents are often excited that their child has attracted the attention of a white man.

“It actually makes them feel proud so they give their permission for the boy or girl to go with the person and when the police try to question them they will not co-operate.”

Former Thomas Cook rep Anne Heap, 53, from Wigan, said: “These people are as poor as poor can be — it’s rare to see a child wearing shoes — and there isn’t any other trade for them outside tourism.

“Thomas Cook used to always give us an extra 10kg luggage allowance so the workers and passengers could bring aid boxes to The Gambia — basic things like clothes, medicine and school equipment.

“The first thing I thought of when we went under was, ‘What is going to happen to people in The Gambia?’ We were the only airline flying directly there.

“I’ve heard that crime has already shot up as there is not enough money coming in — the hand that feeds them is gone.

“Sex tourism is already huge in The Gambia — some bars are like brothels — and I do worry that more children will get lured into prostitution to feed their families.

“When I was working there I would see old men walking with girls as young as 10, 11 or 12. There is a dark side to The Gambia.

“One time when we were flying back to Manchester there was a British man in his 70s with a girl who was only about eight or nine. This was about eight years ago.

“I was so concerned about what was going on that I got chatting to him outside the toilet during the flight. I wanted to speak to the girl too but she never left her seat, she didn’t look comfortable at all.

“I reported it and border security later told me the man had been ‘apprehended’ but I was not able to find out what happened to him or the girl after that.”

Reacting to the photos taken by Sun Online of little Black children seen with older White men, Lamin Fatty said: “This does worry me because, if the children are unaccompanied, they should not be alone in tourist areas without their parents.

“It is also forbidden for a child to be in a bar so late at night and we do not encourage physical affection with minors.

“I work with young girls and boys and I would not hug them or pick them up, it is not appropriate.”

Malick Jallow added: “I would have questioned these men had I seen them myself. As a lawyer and an activist, I would want to know if they have the authority to be caring for that child.

“We have a lot of good Samaritans coming to The Gambia but we also have people who use charity as a front to hide their bad intentions.

“The security guards should have questioned these men but there is a culture of inferiority here and they would have been scared to challenge a wealthy Westerner.”

Health care assistant Lucy Mendy, 33, from Gloucester, was trying to enjoy a winter holiday in the country she has come to see as a second home — but says she was shocked by some of the things she had witnessed during her trip.

She said: “I’ve seen old men taking girls looking as young as 15 or 16-years-old to their hotel room.

“It made me feel sick and I wish I could have intervened, but this is not the UK and I was scared of what might have happened if I tried to confront them.

“People here are so poor, some of them will do anything for money, even if it means giving their bodies to a tourist.”

Father-of-four Abdullah Labamba, 48, who runs a fruit stand next to one of the many hotels that line Kololi’s palm-tree fringed beach, says he has witnessed paedophiles targeting vulnerable child workers selling peanuts for less than £1 a bag.]

He said: “I’ve seen white men approach the little boys and girls right here on the beach. I do my best to stop them.

“I tell the children, ‘Get out of here, this is not a safe place for you.’

“The children will run away but they normally come back. It’s shocking.

“Their parents are desperate for money and they know they won’t be allowed home until they have sold at least five bags.

“Some men try to take advantage of that by offering them £50 for the whole basket. Then they will ask them to come back to go somewhere private.”

Tragically, child abuse is now endemic in The Gambia, where 60 per cent of the 1.9m population live below the poverty line.

Previous research has shown that paedophiles often pose as charity workers and Good Samaritans so they can befriend poor families — and UNICEF has warned that The Gambia is one of Africa’s top destinations for child sex tourism.

The report by Sun Online comes after the UK government was slammed for failing to protect children overseas from British predators.