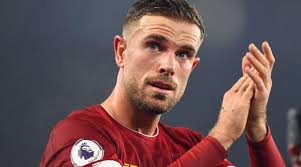 Jordan Henderson has been named as England’s player of the year for 2019, beating his team-mates Raheem Sterling and Harry Kane to win the award.

The Liverpool captain enjoyed success with his club as he won the Champions League last season and came close to winning the Premier League title as they finished second behind Manchester City.

This season, he has also won the UEFA Super Cup and the FIFA Club World Cup with Liverpool, who are currently 14 points clear with a game in hand.

The 29-year-old,  who was voted as one of the top three midfielders in Europe last season played seven times in total for England in 2019 and was key in the midfield as they reached the semi-finals of the inaugural Nations League and qualified for Euro 2020.

Sterling, who scored eight goals in nine games for England in 2019, came second in the BT-sponsored awards, ahead of England captain, Harry Kane, who played ten games and scored 12 goals for the team last year.