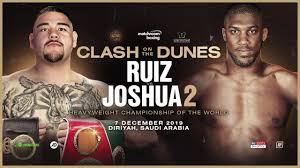 Anthony Joshua‘s rematch with Andy Ruiz Jr has been confirmed to take place on Saturday, December 7, 2019, in Diriyah, Saudi Arabia.

The official announcement was made on Friday, August 9, 2019, with the fight tagged: ‘Clash on the Dunes.’

Joshua will be looking to regain his IBF, WBA and WBO titles after losing them in a shock defeat to Ruiz Jr back in June at Madison Square Garden.  The Mexican boxer defeated Joshua in the seventh-round to hand British/Nigerian boxer his first professional loss.

For the rematch, Saudi Arabian sports authorities are said to be putting up almost $100million (£83million) for the match to be held there. In the UK, the fight will be shown on Sky Box Office.