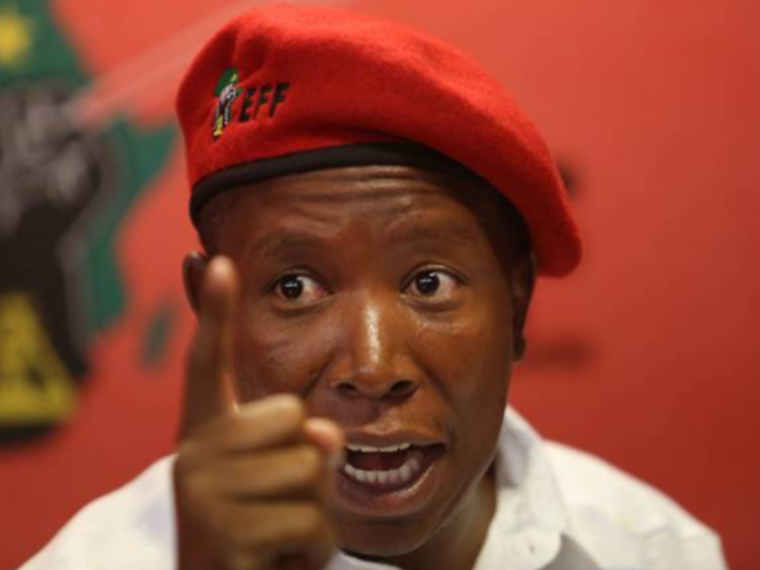 SOUTH Africa’s radical opposition leader says white farmers should leave for “racist” Australia, but insists “we are not killing them”.

IF WHITE farmers want to flee for a “racist country” like Australia they should leave the keys to their houses and tractors behind, the head of South Africa’s radical Marxist opposition party says.

His comments came as Australian Home Affairs Minister Peter Dutton stared down criticism from “crazy lefties” as he pushed on with plans to bring white South African farmers to Australia.

“They don’t realise how completely dead they are to me,” Mr Dutton told Sydney radio station 2GB on Thursday.

‘ONLY RACISTS WENT TO AUSTRALIA’

Malema, who was convicted of hate speech in 2011 for singing the apartheid-era revolutionary song Shoot the Boer, Kill the Farmer and in 2016 told supporters he was “not calling for the slaughter of white people‚ at least for now”, said farmers should “leave quietly”.

But he said they would be “poor in Australia”. “They are rich here because they are exploiting black people. There is no black person to be exploited in Australia, they are going to be poor.

“They will come back here with their tail between their legs. We will hire them because we will be the owners of their farms when they come back to South Africa. As to what we are going to do with the land, it’s our business, it’s none of your business.

“We want Africa back. Africa belongs to our people.

“Our mothers and fathers are not murderers. The white settlers found them here, they killed them, they forcefully removed them, yet our people kept on saying: ‘Let’s talk.’

“Today we say: ‘Let’s talk like our parents kept on saying to you. Let’s talk about how we are going to expropriate land without compensation.’ Then when we say so, they say we want to kill them.”

Last month, South Africa’s parliament voted in favour of a motion, brought by the EFF and supported by the ruling African National Congress, to begin the process of expropriating white-owned land without compensation.

The racially charged issue of land rights and farm murders has been the subject of fierce debate in the country and internationally.

According to civil rights group Afriforum, which represents around 200,000 white farmers largely from the Afrikaner minority, 82 people were killed in a record 423 attacks on farms last year. In 2018 so far, there have already been 109 attacks and more than 15 murders.

Afriforum says it is forced to compile its own numbers because the South African government — which denies the attacks are racially motivated or that white farmers are killed in disproportionate numbers — stopped releasing farm murder statistics in 2008.

“Our rural areas are trapped in a crime war,” Afriforum head of safety Ian Cameron said in a statement, adding that torture with irons, blowtorches, melted plastic and boiling water often continued for hours during the attacks.

“Although the South African government denies that a violence crisis is staring rural areas in the face, the numbers prove that excessive violence plague these areas. Government cannot deny the facts — our people are being mowed down.”

‘PEOPLE ARE BEING SAVAGELY ATTACKED’

“The South African government is offended by the statements which have been attributed to the Australian Home Affairs Minister and a full retraction is expected,” South Africa’s foreign ministry said in a statement at the time.

“That threat does not exist. There is no reason for any government in the world to suspect that a section of South Africans is under danger from their own democratically elected government.”

On Thursday, Mr Dutton said he was unperturbed by “mean cartoons” and negative media coverage. “We just get on with making decisions that we need to,” he told 2GB.

He insisted he was blind to skin colour and would continue to bring in migrants based on the national interest. “It concerns me that people are being persecuted at the moment — that’s the reality — the numbers of people dying or being savagely attacked in South Africa is a reality,” he said.

“We’re looking at ways we can help people to migrate to Australia if they’re finding themselves in that situation.”

Mr Dutton said he had been inundated with messages of support and references to particular cases of white South African farmers in need of help. “We’ll start to work through those and if people meet the criteria under the program then they’ll settle under the program here,” he said.

“If people think I’m going to cower or take a backward step because of their nonsense, fabricated, fake news criticism, then they’ve got another thing coming.”

“They need the skill-set of the white South African farmers if they’re going to have any chance of feeding the population. If we take away the farmers from South Africa, we rob them of the capacity to farm that ground and ultimately feed the population.”

An estimated 500,000 white South Africans have left the country over the past three decades, with more than 200,000 settling in Australia