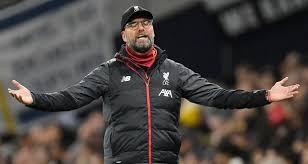 Liverpool coach Jurgen Klopp has revealed that the Confederation of African Football’s (CAF) decision to change the African Cup of Nations tournament timing from June-July to January-February is a bad move that will affect African players, saying the club’s transfer policy towards African players will be affected in the process.

The AFCON will take place next January in the middle of the Premier League season, even though the 2019 edition took place in the summer and  Liverpool will be without Sadio Mane, Mo Salah and Naby Keita for up to six weeks, leading Klopp on Friday during a press conference to warn that the move will make the club think twice before buying Africans.

‘I couldn’t respect the African Cup of Nations more than I do because I like the competition.

‘But it is an obvious problem that you play a tournament in the middle of the season, The African Cup of Nations going back to January is, for us, a catastrophe.

‘It doesn’t help African players. We will not sell Sadio, Mo or Naby just because they have a tournament in January and February – of course not – but if you have to make a decision about bringing in a player it is a massive one because before the season you know for four weeks you don’t have them.