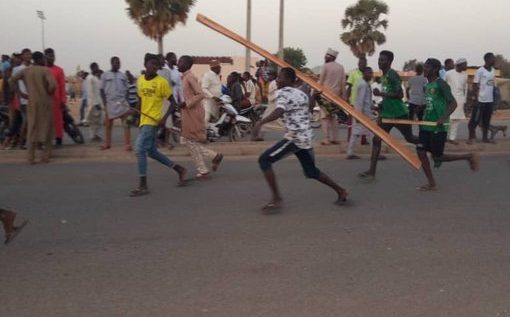 Nigeria Professional Football League side, Katsina United, has accused Kano Pillars fans of causing havoc and damaging the Muhammadu Dikko Stadium venue of the matchday 15 encounter between the two in Katsina Wednesday.

Violent reportedly broke out immediately after the match in which fans of the home side, Katsina United allegedly attacked and wounded Kano Pillars counterparts with some fans said to be injured.

However, no life was lost

He claimed that the Kano Pillars fans went berserk after the home side equalized their lone goal lead in the 44th and started damaging TJE stadium seats, glasses, and doors.

The irate fans of Kano Pillars destroyed and vandalized facilities at the Muhammadu Dikko Stadium despite picking a vital away point in one of the NPFL matchday 15 fixtures in Katsina.

The Angry Kano Pillars fans went wide as at 44th minute of play when Tasiu Lawal long-range effort canceled out Adelani’s 26th minutes goal, they started pulling off the seats and threw it at the officials.

Pillars fans did not stop at that, they broke all the glasses used to decorate the windows and set part of the Stadium on fire.

Recall that, Kano Pillars fans did the same the last time they visited Katsina but went Scot free without being penalized.

However, we have come across different kinds of pictures on social media and rumors making rounds that Katsina United fans attacked Pillars fans, kidnapped and held their players hostage.

We wish to inform the general public that, this is nothing but fabricated lies.

The truth about it is that, the security personnel instructed that the officials, the players and technical crew of both teams remained inside the stadium after the match, while they dispatch and clear the road.

Both teams were eventually escorted out of the stadium and Kano Pillars officials and players were escorted by the Security Personnel to a town close to Daura safely.

The pictures posted online were all fabricated accident pictures as there is no such hospital in Katsina.