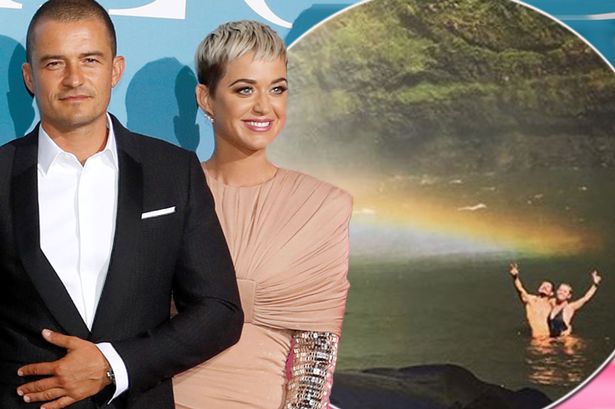 Perry, 34, captioned the partial glimpse of their faces “full bloom” while the actor, 42, posted the same picture writing, “lifetimes.”

Hudson shared several photos from what appears to be the couple’s engagement party.

“Look who got engaged on Valentine’s Day!!” she beamed.

Photos show Perry dressed in red and Bloom in a suit surrounded by dozens of red flowers in a heart-shaped arrangement. Another picture revealed a close-up look at the engagement ring.

In the hours before their party, Bloom shared a message perhaps expressing his love for his lady.

“A shallow person will have only shallow relationships. Real love is not one person clinging to another, it can only be fostered between two strong people secure in their individuality,” he mused. “Antoine de Saint – Exupery, author of ‘The Little Prince’ wrote in a work called ‘Wind, Sand and Stars,’ ‘Love is not two people gazing at each other, but two people looking ahead together in the same direction.’”

The pair first began dating in 2016 but broke up around March 2017. They rekindled their romance in early 2018 with a trip to the Maldives, and there have been many other adventures since then.