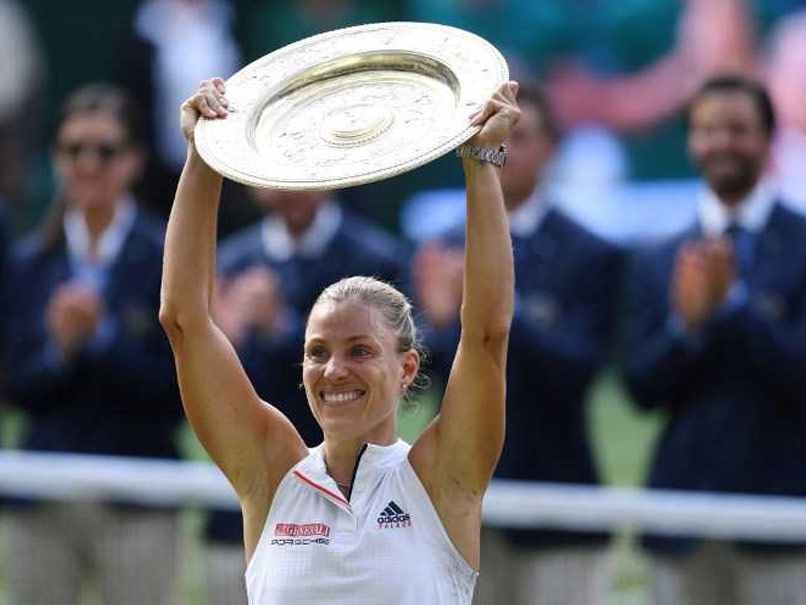 Serena Williams had a fairly easy road to the Wimbledon final in her return to the All England Club. Angelique Kerber, a former world No. 1, made sure that road came to an end.

The 30-year-old German beat the seven-time Wimbledon champion 6-3, 6-3 on Saturday to win her third career major. In the process, Kerber denied Williams a 24th career Grand Slam title, which would have tied Margaret Court’s all-time mark.

“I knew that I had to play my best tennis against a champion like Serena,” said Kerber, the first German woman to win Wimbledon since Steffi Graff in 1996

Williams left the tour after winning the Australian Open in January 2017. After giving birth to her daughter, Olympia, on Sept. 1, Williams dealt with health complications that included blood clots and led to what she said were multiple operations.

“It was such an amazing tournament for me,” an emotional Williams said after making the final in just her fourth tournament of her comeback. “I was really happy to get this far. It’s obviously disappointing, but I can’t be disappointed. I have so much to look forward to. I’m literally just getting started.”

Williams played doubles with her sister Venus Williams at the Fed Cup in February. Williams returned to the tour in March, making limited appearances without much success. After another two months away, she played in the French Open in May, withdrawing in the fourth round with an injured pectoral muscle.

Two months later, she returned to the All England Club as the No. 25 seed — ranked No. 181 in the world — in just her fourth tournament since becoming a mother. As top-10 seeded players kept losing in the first week, Williams kept advancing — though she didn’t face a seeded player until she beat No. 13 Julia Goerges in the semifinals.

“I’m just me, that’s all I can be,” Williams said about playing as a mother. “To all the moms out there, I was playing for you today, and I tried. Angelique played really well, played out of her mind.”

Kerber made only five unforced errors the entire match, 19 fewer than Williams. Perhaps more impressive was this: She broke Williams in 4 of 9 service games.

Kerber is one of just five women to beat Williams in a Grand Slam final — having also beat her to win the 2016 Australian Open — and joined Venus as the only ones to do it twice as Williams fell to 23-7 in the final of a major.

“I knew that I had to play my best tennis against a champion like Serena,” Kerber said.

Now she just needs to win the French Open to complete the career Grand Slam.

Kerber played as cleanly as can be, covering the court well and picking her spots for big shots as she cruised through the first set. Williams, meanwhile, played tight from the outset.

After taking the opening two points, Wiliiams made four miscues in a row to get broken. That was part of a run in which she dropped 8 of 9 points. The American was mostly her own undoing, too: She was responsible for the final’s initial six unforced errors. By the time the first set was over, the disparity was 14-3.

Kerber continued her momentum in the second set, scurrying along the baseline, this way and that, using a combination of quickness and anticipation to track down what often appeared to be winners for Williams but were not enough to end a point.

She delivered a pair of down-the-line forehand passing winners to collect the last break she’d need, for a 4-2 edge in the second set. And, ultimately, she collapsed on the grass court in jubilation after converting match point, caking dirt on her white dress.

“This is something special,” Kerber said. “And to hold this trophy now, it is something that I can’t describe.”

The usual 2 p.m. start time was pushed back as the men’s semifinal match between Novak Djokovic and Rafael Nadal was played to a finish having been carried over from Friday.

In a role reversal from her wedding — at which Williams was a guest in May — Meghan Markle, the Duchess of Sussex, watched her friend alongside sister-in-law Kate Middleton, the Duchess of Cambridge, from the royal box.