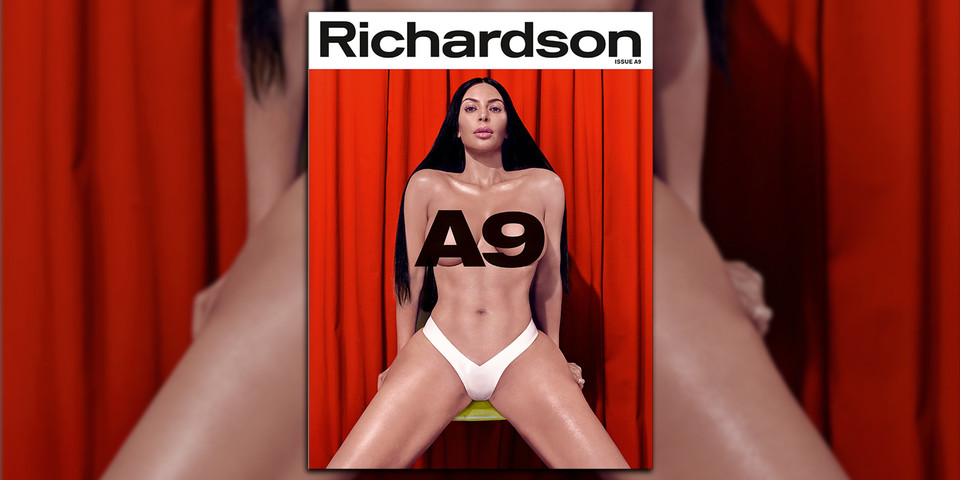 Kim’s revealing pics are said to be “inspired by the Japanese adult animated psychological thriller, ‘Perfect Blue,’ directed by Satoshi Kon,” according to the mag. Klein’s images show the reality star straddling a chair topless, as well as crouching face down nude in a bathtub. “American Psycho” author Bret Easton Ellis interviewed Kim as part of the cover piece.

Richardson told Vanity Fair of landing Kim for his cover: “I basically was working with Kanye on a couple of projects, so I had met with Kim … That was about a year and a half ago. A lot of energy went into getting it to work and making it happen. It was very cool, but logistically probably more challenging than anything we’d done before.”

Complicating matters, Kim recalled to Jimmy Kimmel that she got a phone call from President Trump in the middle of a “nude” photo shoot when the White House had pardoned inmate Alice Johnson, whose freedom she’d championed. She told Kimmel without naming Richardson Magazine: “I was at a Steven Klein photo shoot. And if anyone knows who he is, it’s pretty much a nude shoot. So, I’m naked, and my phone rings and I’m all glammed up.” But, “I put a robe on [when talking to Trump].”

Richardson told VF that when that call from Trump interrupted the shoot, “It was slightly worrying for a minute, because I thought, ‘Oh well, this could change everything and it could shut the shoot down.’” But, “as a testament to Kim, she was there from 7 a.m. until 11 at night the first day and about the same the second day. She’s really hard-working and committed and didn’t really waver. It didn’t really change anything. There was maybe a conversation, but it didn’t change her commitment to the project.”

She apparently arrived on the set with no publicist and just an assistant.

Kim’s previous revealing covers include the attention-grabbing, arty “break the internet” shoot by Jean-Paul Goude for Paper Magazine in 2014.