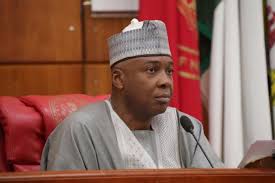 Kwara State Government has said it will build a secretariat on the piece of land reclaimed from ex-Senate President  Bukola Saraki.

A Government House statement on Friday by the  Chief Press Secretary to the Governor, Rafiu Ajakaye, said, “Ownership of the land bordering the Civil Service Clinic in Ilorin has officially reverted to Kwara State Government. A  new secretariat complex will be erected on the land next year.”

Ajakaye said  “the land was originally meant for Government Secretariat and a parking space for the Civil Service Clinic but was unlawfully allocated to a private firm Asa Investments Limited without any record of payment to the state government.

“No certificate of occupancy was ever issued in favor of the firm.”

The statement added,  “Hundreds of civil servants still operate from rented apartments at a huge cost to the government. The new secretariat, once completed in 2021, will definitely go a long way towards ending this unhealthy trend as well as provide a more conducive and decent working environment for government workers.

“Governor Abdulrahman Abdulrazaq has signed a constitutional instrument withdrawing the allocation of plots of land 1, 3 and 5 to the firm, asserting that the said land was unlawfully appropriated contrary to the purpose for which it was meant.